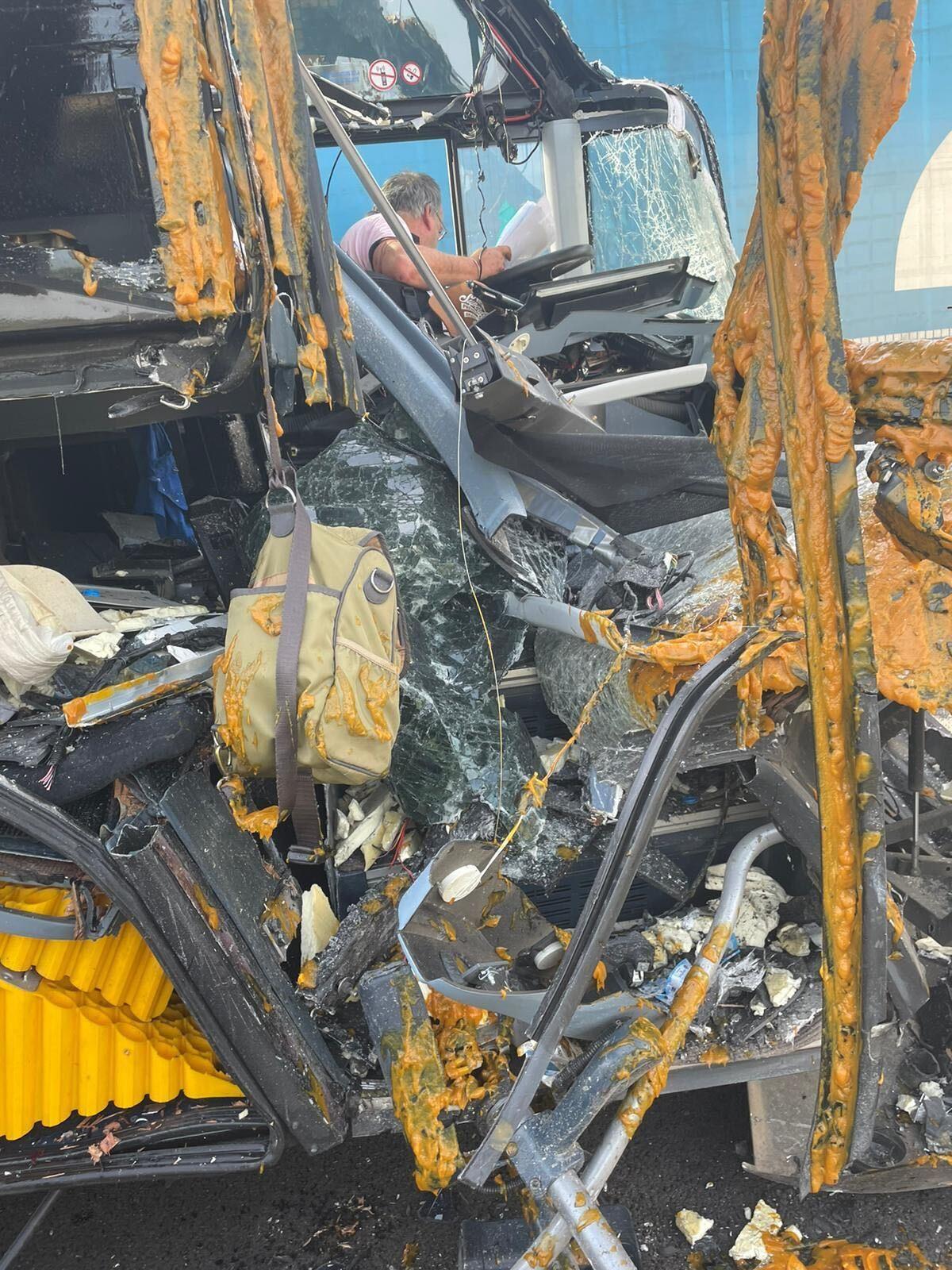 A tour bus carrying dozens of Albany teenagers on an educational trip to France slammed into a truck at a rest area on Friday, trapping and seriously injuring a teacher, throwing students from their seats and spitting shrapnel drink on the bus. Thirteen students also suffered injuries – from cuts to broken bones – according to authorities.

The bus was carrying 37 people, mostly high school students, on the sixth day of an annual 10-day tour organized by an Albany middle school French teacher who was reportedly seriously injured. His condition and the nature of his injuries were not immediately known.

A spokesperson for EF Education Tours, which organized the tour, confirmed the accident and said it had sent a team of five to help communicate with families and offer advice to students who were in the bus.

“We are shocked and saddened by what happened,” Adam Bickelman said. “Our thoughts are with those who have been injured and we are doing everything we can to support everyone involved during this difficult time.”

According to L’Indépendant, a French newspaper, the accident happened at the Vinassan rest area near Lyon’s A-9 highway when the bus collided with a heavy cargo truck, similar to a big American truck.

Albany Unified School District Superintendent Frank Wells said the tour was not officially associated with the district, but he had been in contact with chaperones who told him that in addition to the teacher injured, Linda Kaiser, 13 students had sustained non-life-threatening injuries.

The teacher had to be extracted from the wreckage of the bus, the front of which was crushed, and was airlifted by helicopter to a hospital, he said.

“My stomach was in knots all day” as he tried to gather information about the collision, Wells said.

Parents told The Chronicle they were told by chaperones that the students had been taken to three different hospitals for treatment of their injuries and that some of the uninjured students who reported head pain were taken away to the hospital for observation to ensure that they did not suffer from concussions.

Most of the students on the trip were recent college graduates about to start their freshman year at Albany High School. Although the annual trip is organized by French teachers, it is a community event with no connection to the school. But some older students, who missed the tour due to the pandemic, also attended.

Older students helped translate between injured students and medical personnel at the scene of the crash, 16-year-old Sydney Mercer, who will be a junior at Albany High School, told The Chronicle via text message.

She said the bus was heading from Carcasonne to Provence when the accident happened and it is unclear what happened. The bus had seat belts, she said, but most of the students weren’t wearing them and were thrown from their seats due to the impact. Then, just after they were advised to stay on the bus and not grab their belongings, the front of the bus fell off and they were ordered to get off the bus.

The students helped each other by using bandages and handkerchiefs from first aid kits to treat cuts and bruises, she said. Those who were not injured helped to ensure that students taken in ambulances were not separated from their backpacks.

While most of the injuries were relatively minor, she said, “it was more traumatic than just bruises and cuts. “People are going to deal with the emotional impact for a while.”

Wells said he was gathering the names of the trip’s attendants and students and pledging the district’s assistance.

“Although this is a community trip, we are here to support and assist our students, parents and teachers as needed while they recover from this,” he said.

Mercer said she was impressed by the response from French emergency officials but also from her comrades.

“I’m very proud of how everyone acted in comforting and helping each other throughout the experience,” she said.

The students, accompanied by adults, were taken to several hotels. Bickelman said the group will decide whether to continue the trip or end it prematurely.

Not much is happening in the education budget