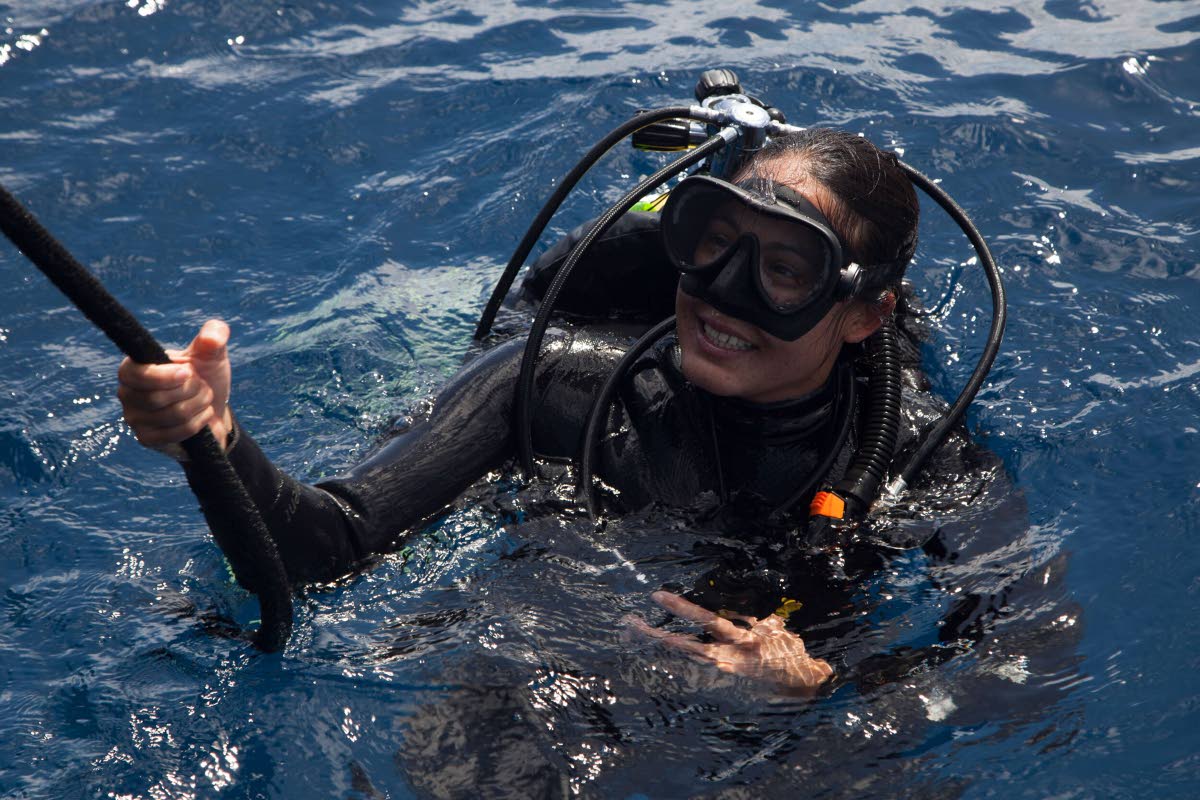 So you are planning to study marine science? Dr. Anjani Ganase shares some of the reasons why she became a marine biologist.

Why get into marine biology?

The marine world was accessible and fascinating, having grown up on a small island. Trinidad and Tobago is more exposed to the ocean than most other places we think of. Small island states have a population of approximately 63 million, or less than one percent of the world’s population. The ecology of the islands is closely linked to the ocean. Growing up I was able to hike the northern range and follow rivers leading to the ocean. I spent most of my time on the beaches with my head underwater. My parents made sure I learned to swim. My grandfather was a fisherman in his spare time; he was taking me snorkeling in the De Islands.

I was interested in science at school and did math, biology and physics. However, I have met many marine scientists who only entered marine science later in their studies and left other fields, such as business and languages. These other skills helped when planning projects and working in other countries. I did an undergraduate degree in marine biology at the Florida Institute of Technology. Here I realized that the foundation of marine biology is in the invisible. Marine microorganisms are the cogs that keep the ocean food chain turning. I did my Masters at the University of Amsterdam, the Netherlands, followed by a PhD at the University of Queensland, Australia. Graduate studies provided hands-on learning about marine research, as well as valuable mentorship. Having good mentors to guide your next steps will shape your career as a marine scientist. I was fortunate to have mentors who gave me the opportunity to work on their research projects and encouraged me to learn new skills – laboratory work, statistical programs, computer languages, driving a boat.

Is diving essential for a marine biologist

Although learning to dive is a way to learn about the marine environment, it is not essential. There are many marine environments – mangroves, seagrasses – that do not require diving to study them. You can experience the underwater environment that exceeds our diving limits using remote-controlled vehicles and submersibles. It is essential to learn to swim, because marine biology requires work in the water.

The greatest encounter with the ocean

There are many, but my most memorable was seeing a whale shark swimming above my buddy and I while snorkeling in Indonesia. I was lucky enough to encounter dolphins, sharks, mantas, but I had given up hope for a whale shark. It was at least 25 feet tall, moved gracefully in the shallow waters, and there were many small fish swimming or propelling around its mouth and body.

Worst experience in the ocean

The worst experience is associated with the ocean itself. You can’t do anything when the sea currents carry you away. I’ve experienced currents strong enough to carry you around an island and drag you deeper, even here in Tobago where divers can experience some of the most harmful currents. During these experiments, it is important to remember your training, to stay calm, to breathe and to balance your ears.

How much are you paid

For most marine biologists, money is not the reason to get into this field. Marine scientists are thalassophiles (we love the sea) and are drawn to the experience of the ocean. Salaries depend on where in the world you work, the area of ​​interest, as well as the job. Salary doesn’t have to be the most important aspect of your job.

The marine world needs biologists, engineers, chemists and all other land-like scientists. In Trinidad and Tobago, interest in the ocean and related areas of research and development is slowly rising. Many marine conservationists and enthusiasts often need to develop their own niche and start their own business or connect with local universities, NGOs and research institutes. Internationally, marine experts specializing in chemistry, microbiology and aquaculture are in demand and work in companies interested in water quality and mariculture. There are also conservation posts in national marine parks and regional and international NGOs. Those interested in marine science should have regional and international learning experiences.

Daily routine of a marine biologist

Work with biology or marine science is often research-driven, whether to understand the environmental impact of coastal development (eg jetty construction) or to explore never-before-seen underwater habitats. Scientists need to know how to plan, budget, and execute projects to answer specific research questions.

Marine biology research areas span the entire length and depth of the ocean and given that Trinidad and Tobago is responsible for an ocean area 15 times larger than the land masses of the two islands combined, there has a lot to learn and discover in our ocean backyard. To develop projects, a lot of time is spent reviewing the scientific literature to find out what other studies exist in other places or on different species to help narrow down your question and maximize the success of your research.

Another crucial element is connecting with experts in the specific areas of interest for the contribution, and even collaborating depending on the skills needed to conduct the research followed by an external review of the process. Working in the marine environment is very expensive – boat rentals, scuba gear – so we want to make sure we plan properly. The easiest part might be the field work.

Time spent in water or diving

Most coral reef scientists will undertake one or two major diving expeditions per year to collect essential data, but the time spent working in the field can vary greatly from a few weeks to several months. Fieldwork and diving can be intense as we are limited in how much time we can spend underwater, but many marine biologists spend a lot of time underwater. We often carry tools, such as underwater cameras, dive slates to help with data recording. We sometimes leave recording equipment underwater (cameras, data loggers, trackers) and come back for it, hoping we always find it because anything built to survive in sea water tends to be costly.

On diving expeditions, most evenings are spent processing samples and saving all the information gathered during our time underwater, and then preparing for the next day. Working in the field can sometimes be long and arduous, but also incredibly rewarding due to the chance encounters we have underwater. Time spent in the field collecting data often results in more time spent behind a computer processing the numbers and reporting the results. Many marine scientists dive to collect samples for DNA sequencing/laboratory analysis or tank experiments.

The far north of the Great Barrier Reef in Australia offers the best diving I have ever experienced. This stretch of the Great Barrier Reef sits on the northernmost tropical tip of Australia’s east coast, far from any major cities. The coral reefs were pristine and teeming with life, including many large fish and sharks curious about us. We would snorkel in the reefs adjacent to Raine Island, a sand cay with the highest density of nesting green sea turtles in the world; we would see hundreds of them in a single dive. Nowhere else in the world have I seen coral reefs with so much life. Seeing these reefs before the desecration by climate change was worth it.

Unfortunately, many of these reefs have suffered severe coral bleaching in the years since my dive. It was sad to see such a loss of corals and other marine life due to coral bleaching. As a marine scientist, I must now be an advocate for these precious but vulnerable places in the world.