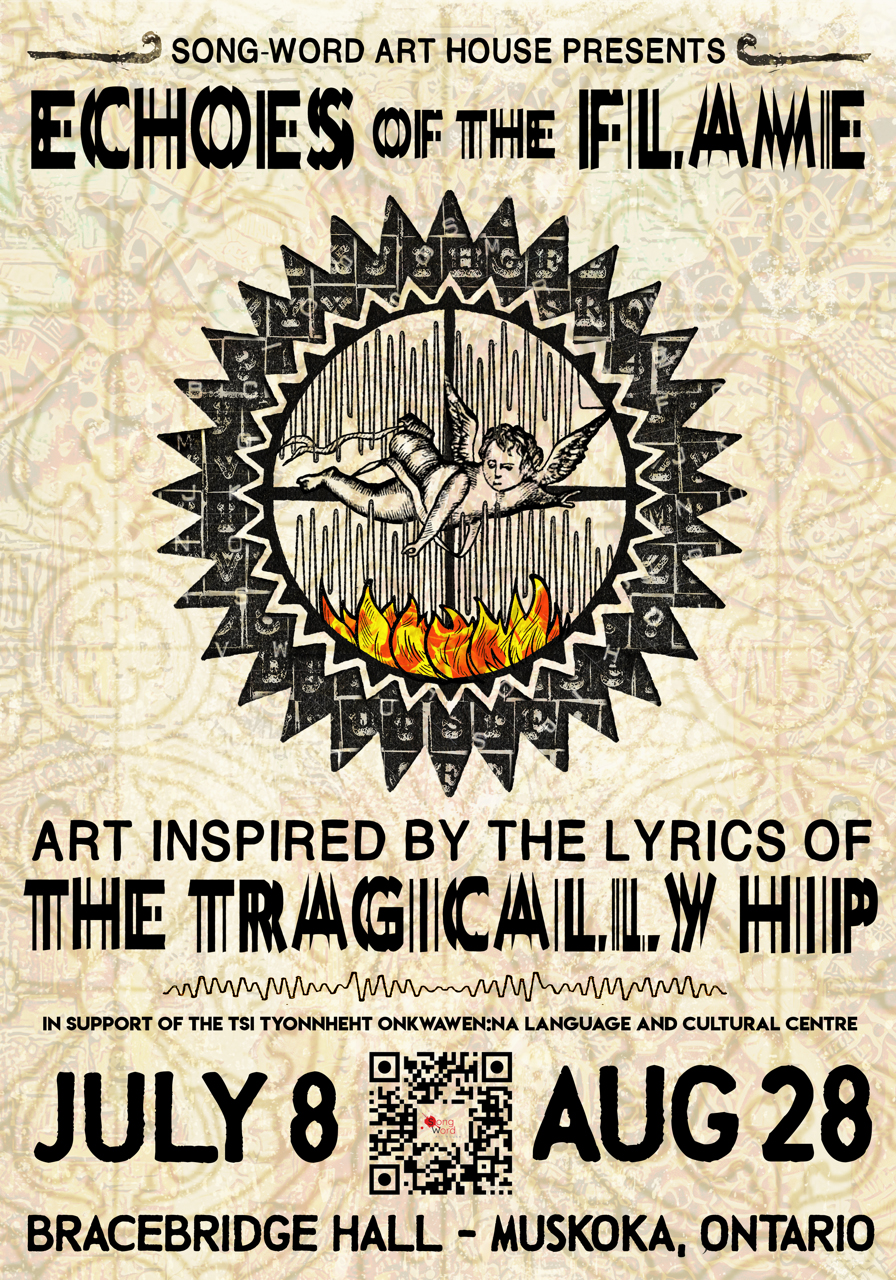 Art exhibition inspired by The Tragically Hip coming to Bracebridge

Much like the Muskoka region itself, The Tragically Hip’s music is iconic and uniquely Canadian, and an art exhibit inspired by their lyrics is summering in Bracebridge.

The Echoes of the Flame exhibition at Bracebridge Hall will run from July 8 to August 28. It is the creation of Song-Word Art House, an art curation and production company that focuses on art inspired by music. Co-founder Joe Woolf said the idea came from a desire to combine the energy and “flame” of songwriters with that of top artists to create something special and new. They often try to associate their exhibitions with current cultural movements, whether it’s a blues-based spectacle to highlight the emotions of the pandemic or a grunge-focused gallery to reflect the rebellion in period of political turmoil. Working with The Tragically Hip is a long-time goal come true for Woolf.

“Their lyrics have defined the country for so many people in so many different ways, whether politically or socially, so at some point we were going to tackle The Tragically Hip because we knew we were going to have something great. powerful to work with,” Woolf said. “The lyrics to Gord Downie’s songs are legendary, and they’re still very much part of the fabric of people’s identity in Canada, so working with them has always been at the top of the list.

Bringing the hip to Muskoka

The creation of the exhibition was personal to Woolf in several ways. He grew up in Toronto and spent many summers at camp in Algonquin Park. He spent canoe trips and days off as a councilor exploring Gravenhurst, Huntsville and other parts of the region. He also visited cabins, planted trees and took fishing trips through Muskoka, all backed by a soundtrack by The Tragically Hip.

When it came to choosing a venue for the exhibition, the LA-based art house team discussed their usual approach of holding a high-end gallery in a big city, but that doesn’t didn’t seem like the right fit for the band, Woolf said. For him, Muskoka encapsulated the magic and memories of listening to The Tragically Hip and co-founder Liz Cruz agreed.

“What makes our company different is that we love giving people an experience, and so part of that experience has to be authentic to whatever group we represent,” Cruz said. “Muskoka was a perfect fit for The Tragically Hip.

Cruz said it was also important to them that the exhibit be accessible and allow as many people as possible to see the art. Having this kind of grassroots approach to the show gives people who love the group a chance to experience the art over the summer, she said, and admission is also free.

Woolf said they drove around Muskoka to determine the best location for the exhibit. Their initial instinct was to go somewhere like Port Carling or Gravenhurst, but after seeing Bracebridge Hall they knew their search was over.

“We knew from the start it was a home run,” he said. “Not only is it a cool vibe bar that has craft cocktails, craft beers and whatnot, but it’s also a live music venue and an art gallery. The combination of all of those things was a 100% complete match, and sometimes when the stars align like that and it’s a good fit, you just go with it.

The exhibition features works by a diverse group of 18 artists. Members of The Tragically Hip oversaw the artist selection process and it was important to them that the majority of artists were Canadian. About 75% of the works in the exhibition are made by Canadians, including Indigenous and French-Canadian artists, while the remaining artists come from places like Portugal, the United Kingdom and the United States.

Because the band’s music is so personal to so many people, Woolf wanted to make sure he did well with them. To that end, he had the honor of working on this exhibit alongside guitarist Rob Baker and other band members. In addition to selecting the artists, they also chose the Tsi Tyónnheht Onkwawén:na Linguistic and Cultural Center, located on a Mohawk reserve in Tyendinaga, as the recipient of a portion of the artwork’s proceeds.

“We are so happy and gratified to see the music we have created transformed into new artistic expressions…like seeds we have scattered that have taken root and are now in bloom,” The Tragically Hip said in a statement. communicated. “We are also thrilled to be able to donate proceeds from this show to help build a language and cultural center on the Tyendinaga Mohawk Reservation. »

Woolf said band members will likely visit the exhibit at some point in the summer. He hopes their fans will also take the opportunity to see the various artists’ renditions of “songs from the early days of ‘Road Apples’ through to the more recent stuff they were producing.” It’s a chance to see the different perspectives of artists while connecting with fellow fans and hopefully reminiscing on fond memories.

“A lot of people have the same experience as me growing up, listening to The Tragically Hip,” Woolf said. “It’s like the soundtrack of their life, sitting by a lake or a campfire, and especially in the late 80s and 90s through the 2000s, you couldn’t really having a radio station on and not playing The Tragically Hip.”

Connections of Loss and Love in Lyrics

Artist Michael Barber knows the feeling. When the art house approached him about participating in the exhibition, he jumped at the chance and it was amazing to incorporate The Tragically Hip into his art, he said.

“Since they started I’ve been listening to their music and it seems like throughout your life you have memories of being certain places, at parties or weddings or whatever, and there’s always a song Tragically Hip that brings you back to this place,” Barbier said. “They just define Canada. »

Barber also works in graphic design, and although he uses text all the time in this area of ​​his work, he never really thought about including words in his artwork. His painting for the exhibit includes four lines of text, two in Mohawk and two in English, taken from his inspirational song “Fiddler’s Green.”

It’s a moving and “painfully beautiful” song about the death of the late singer Gord Downie’s nephew and it tells a tragic story that Barber resonated with as an Indigenous person. Her grandmother went to the Mohawk Institute boarding school in Brantford, where she was punished for speaking her native language. She never spoke about her experiences and about 25 years ago, while on her deathbed, she spoke to Barber in Mohawk for the first time.

“The loss of a young child is unimaginable, but they created a masterpiece out of that, so the connection for me through this whole project was that my family were residential school survivors,” he said. -he declares.

The loss, both of life and culture, in residential schools parallels the loss of a child in song, Barber said. He had previously worked on a series of pieces related to residential schools, so the exhibit allowed him to continue that common bond while contributing to the discovery and preservation of Indigenous cultures at the Tsi Tyónnheht Onkwawén:na Language and Cultural Centre.

Based in Port Dover, Barber hasn’t spent much time in Muskoka, but he’s looking forward to attending the opening night gala at Bracebridge Hall on July 8. He wanted his play to look like it survived something because it’s a portrayal of stories, so he hopes it will resonate with viewers. He encourages residents to take the opportunity to visit the exhibition, see the different interpretations and find out what speaks to them.

“Music means so much to so many different people and everyone connects to it differently,” Barber said. “The Aboriginal connection with the Mohawk Language School that a portion of the proceeds go to is the perfect alignment for me, so I’m really excited to be a part of it.”

To find out more about the exhibition, visit Song-Word Art House website. For more information on the Tsi Tyónnheht Onkwawén:na Language and Cultural Center, click on here.

On the front of the stage with Emillian Garcia | News, Sports, Jobs