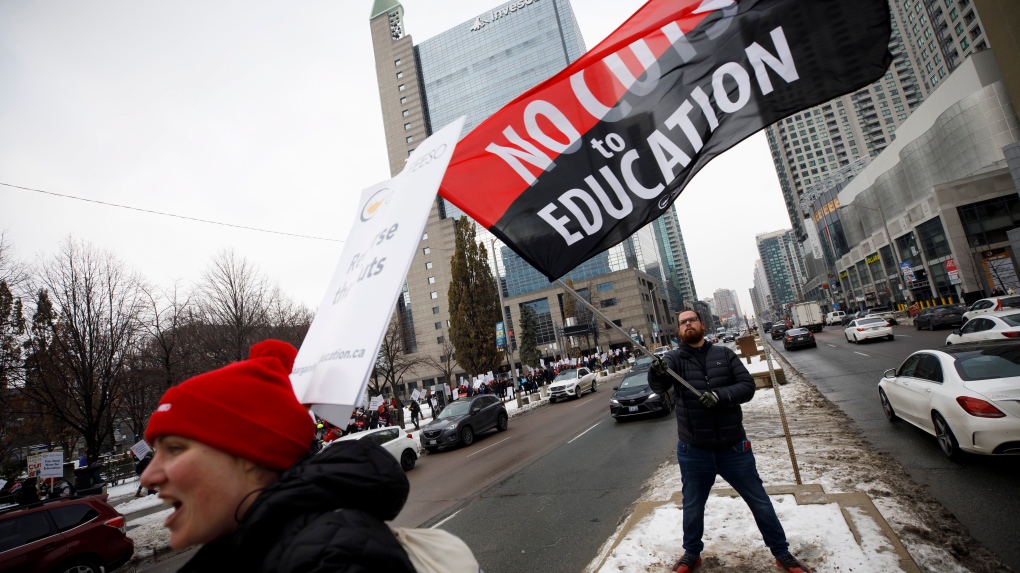 Beginning of negotiations in the education sector in Ontario

Negotiations with Ontario’s five education sector unions began this week before collective agreements expire at the end of August.

It’s the start of a long process as the Ontario government tries to reach new agreements with unions representing more than 243,000 education workers, many of whom feel they have fallen behind. in recent years due to provincial legislation capping public sector wage increases. at one percent.

In a statement provided to CP24.com this week, Education Minister Stephen Lecce said he was committed to “achieving an agreement that keeps students in the classroom without any interruptions”, particularly at the light of learning loss during the COVID-19 pandemic.

But some of the unions representing education workers expect a difficult process after the Ford government presented a plan in 2019 to increase class sizes, sparking months of social unrest and a series of rotating teacher strikes from high school.

Here’s what you need to know about the road ahead:

THERE IS A TWO-TIER NEGOTIATION PROCESS IN THE EDUCATION SECTOR

Unions will use their initial bargaining sessions with the province, in part, to sort out which issues will be negotiated at the central table and which can be negotiated directly between school boards and their local unions. Ontario English Catholic Teachers’ Association (OECTA) President Barb Dobrowolski told CP24 that the central issues are usually monetary, with pay and class sizes usually being the most contentious topics. She said issues related to “staffing processes,” like vacancies and job offers, are usually negotiated locally.

ALL PARTIES SEEM WILLING TO GO BEYOND LAW 124

The Progressive Conservative government passed legislation in 2019 limiting public sector wage increases to 1% per year, but with Bill 124 due to expire later this year, Premier Doug Ford said teachers and education workers can expect a salary increase of “more than one percent”. The question, of course, is how far the government will be willing to go in the face of runaway inflation that has driven up the cost of living for all Ontarians. of Ontario Secondary School Teachers (OSSTF), Karen Littlewood, told CP24 this week that her members were “encouraged” to hear Ford talking about the end of Bill 124 last month, but at the same time , she said it was too early to know “what the offer is going to be or if it will have a cost” in terms of other concessions.

“It’s been incredibly frustrating,” she said of Bill 124. “They (education workers) just don’t feel the respect they deserve after putting everything on the line for the pandemic to ensure students had the education they needed.”

AT LEAST ONE OF THE UNIONS IS ENGAGED IN “OPEN BARGAINING”

CUPE’s Ontario School Board Council of Unions (OSBCU), which represents 55,000 education workerssaid this week that it will publish full details of the proposals it makes as well as the proposals it receives as part of a commitment to “open and transparent” negotiations.

The union says it’s a new approach to generating a public conversation about the state of public education.

“We believe that not only our members, but also our community should know what is going on. What happens at the bargaining table impacts our communities to the extent that we are able to provide,” OSBCU President Laura Walton told CP24.com this week. “Making sure there is a gatekeeper on site for school communities, making sure that adequate services are in place for parents so that when they send their child to school they can understand that ‘There will be people in place to keep them safe, secure and successful. These are all important elements and that is why we are moving forward with a more open process.

OSSTF President Karen Littlewood told CP24.com that it would be “more typical” for negotiations to begin after the current collective agreements expire at the end of August, rather than in July. She said the fact that talks started this week with most unions is a positive sign. A spokesman for Education Minister Stephen Lecce said the first negotiating sessions had in fact taken place with four of the five unions in the education sector this week. Representatives of the fifth and last union, which represents teachers and education workers in Ontario’s French-language school boards, are scheduled to meet with the government on Monday.

“We are ready to meet with any union, 24/7, no exceptions,” the spokesperson said, noting that invitations have already been sent out for future bargaining sessions.

FORD GOVERNMENT WANTS LONGER DEALS THAN IN THE PAST

Collective agreements in the education sector typically have a three-year term, but in a memo sent to unions earlier this month, Lecce said the government was seeking comments on a longer four-year term. year. The education minister said the longer deal would provide more “stability for staff, pupils, parents and guardians” and help schools move beyond the COVID-19 pandemic. The OSBCU suggested the move was largely political, as securing labor peace would boost the PC government’s chances of re-election in 2026. Other unions, meanwhile, suggested they would consider the longer term, but only if it was part of a larger agreement. which addresses a number of important issues.

“You don’t predetermine that you’re going to have a deal for a certain length of time without knowing what else is going to be on the table,” Littlewood told CP24.com. 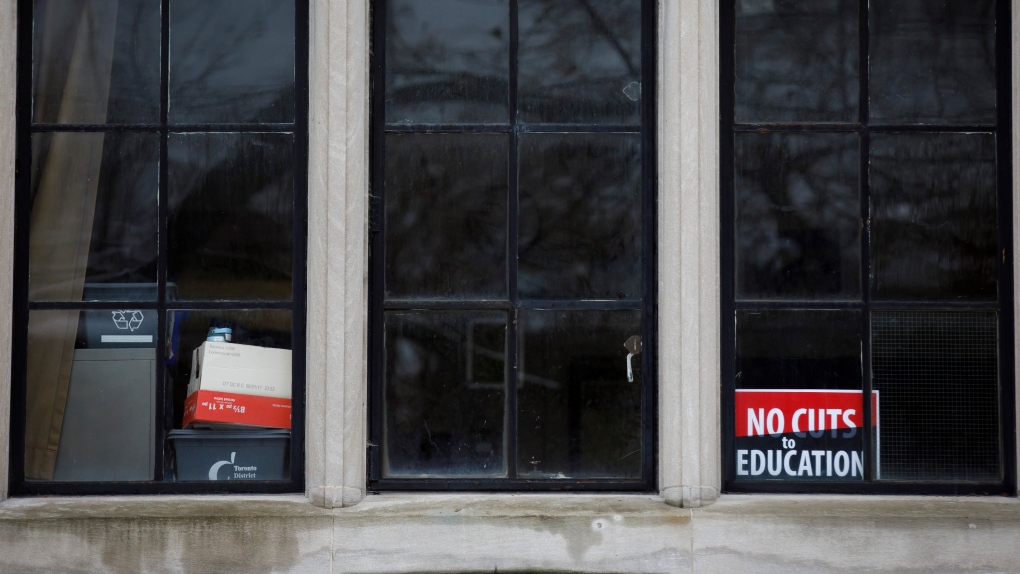 A sign is seen inside a high school classroom window as teachers walk the picket line outside Toronto, Wednesday, Dec. 4, 2019. THE CANADIAN PRESS/Cole Burston

EXPANSION OF DISTANCE LEARNING COULD BE LITIGATED

In 2019, the Ford government announced that high school students would have to take four online courses to graduate, but ultimately scaled back that public backlash plan, saying instead that students would have to take two online courses and that exceptions could be made on an individual basis. . It’s unclear whether the government will seek to further expand e-learning in this round of negotiations, but every union leader who spoke to CP24.com hinted they would be ready to fight if such was the case.

“What we’ve seen during the pandemic is that the teachers were really amazing, they spared no effort in trying to adjust their teaching online, they did everything to try to involve the kids, but virtual education is a poor substitute for in-person learning,” said OECTA President Barb Dobrowolski.

“We need to recognize the needs of students and that face-to-face is the best way to learn,” added OSSTF’s Karen Littlewood. “We must avoid any push towards privatization and any push towards the degradation of the public school system. We need to make sure that we fund public education as an investment, because that is what it is.

DIFFERENT UNIONS HAVE DIFFERENT PROBLEMS, SOMETIMES EVEN WITHIN THEIR RANK

The OSBCU represents thousands of frontline education workers, including janitors, school library workers, administrative assistants, early childhood educators, information technologists, bus drivers , cafeteria workers and office staff. He says his average member earns just $39,000 a year and is struggling to get by, making compensation his biggest priority during this round of bargaining. .

“We are hearing more and more about people who are unable to qualify for mortgages or who cannot qualify for rental applications due to low income,” Walton told CP24.com .

OSSTF, on the other hand, represents 60,000 members. About a third of these members are education workers who tend to have lower salaries. The remaining two-thirds are teachers who average over $100,000 a year.

PARENTS CAN COUNT ON SCHOOL STARTING IN SEPTEMBER, AT LEAST

In 2019, talks between the union and the government dragged on for months, until OSSTF began staging one-day rotating strikes in December of that year. The Elementary Teachers’ Federation of Ontario followed suit, beginning in January.

“Education workers and teachers will continue to be there for students,” promises Littlewood. “We fully intend to be in class in the fall to welcome students back in person.”

With the help of Hendrix Alumni, Apptegy continues its growth trend