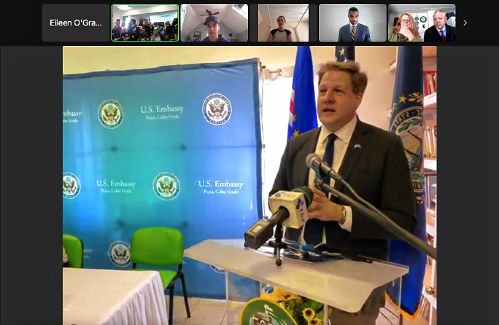 The Zoom call, which took place between students at Bow High and about 20 English Honors students at Pedro Gomes High School in Cabo Verde, was facilitated by New Hampshire Governor Chris Sununu, who is visiting the island country this week for a signing ceremony to officially establish a state partnership between New Hampshire and Cabo Verde under the National Guard Bureau’s State Partnership Program. Bow High School and Pedro Gomes High School have also partnered, so students can learn more about each other’s lives.

“I was so excited that the initiative had been taken because it tells me there could be more opportunities for education, not just you guys leading the way, but allowing really a lot of other students to connect,” Sununu told students on Friday. “…The relationship that these two schools have forged, I think, has the potential to launch something really, really big and really, really lasting for both of us.”

Sununu and US Ambassador to Cape Verde Jeff Daigle spoke from behind a podium in a classroom at Pedro Gomes High School, where students were seated in chairs in front. Two Zoom cameras, one on each side of the room, gave Bow Online students two different views of the room.

As winter temperatures in Cape Verde usually stay in the 70s, Sununu joked with the students that he wished he could fill the military plane with snow as a gift. Several Bow students, whose in-person classes were canceled on Friday due to snow, pointed their cameras at their windows to show the snow accumulation in New Hampshire.

Pedro Gomes High School is a school in the capital Praia that runs from grades 7 to 12 and has 2,000 students and 78 teachers. The students wear uniforms of white polo shirts and olive green pants, and they attend five classes a day. Students have their classes in the morning or afternoon depending on their grade level, said one of the student representatives, but their day usually starts at 7:30 a.m. and ends at noon, with breaks in the middle. The school offers foreign language courses in English, French and Mandarin.

In his introduction, Ambassador Daigle praised the students for studying English.

“The reason you study English is that it’s a tool; it’s a way to open up, to open your school, your country to the rest of the world,” said Daigle. “English is spoken in the United States, but in reality, English is the language of business, of international business all over the world. It is the language of science; if you are in science, you must speak English, if you are at the airport control, you must speak English.English is a tool that people all over the world use to improve themselves and really increase the economy of their country.

During the Zoom call, New Hampshire students asked Cape Verdean students many questions, about their favorite classes, what they do for fun, and the geography of the island country. A student representative for Pedro Gomes stood behind the microphone and answered most questions, although others called in responses from the audience.

The partnership between Pedro Gomes and Bow High is coordinated by Bow teachers Derek DeAngelis, Colony Barrett and Heather Rosenbleeth. DeAngelis said Thursday that her goal is to open her students’ eyes to the lives and education of teens around the world.

“We always tell our students that the best thing we can do is travel,” DeAngelis said. “One of the most important things is to be aware of the world.”

Cabo Verdean long-distance runner Ruben Sança, who competed in the 2012 London Olympics, was also on the Zoom call to share his story of immigrating to the United States at the age of 12.

“At first I was scared,” Sança said. “I was scared because I didn’t know the English language. I was afraid of the cold and really didn’t want to leave my friends at home. Finally, I didn’t know if I would fit into American culture. … The United States proved me wrong. I arrived in Boston and realized there were a lot of other immigrants here too. Through unity, perseverance, and hard work, I have been able to take advantage of the many opportunities the United States has to offer, including education.

Students of Pedro Gomes asked Sança questions about the opportunities available to Cape Verdeans in the United States and if he could have achieved the same success without emigrating. A student asked about discrimination and what it’s like to be a black man in America.

“I think the United States has made great strides in the areas of diversity, equity, and inclusion,” Sança said. “And the United States continues to educate through high schools, through colleges, through all the different curriculums and trying to find ways in which we can find value in each of us.”

At the end of the event, Sununu presented Pedro Gomes students with Bow High School football shirts as gifts.

While in Cape Verde, Governor Sununu also met with President José Maria Neves and made a presentation to Cape Verde officials to promote future prospects for commercial, educational and cultural partnerships with New Hampshire. The trip will be fully reimbursed by the federal government through the Department of Defense, according to the governor’s office.

“We are more secure as a state and a country with strategic partnerships across the world,” Sununu said in a statement Wednesday. “Not only will this mission strengthen the military partnerships between our two governments, but it will forge bonds between our citizens, sharing and promoting our cultures, our values ​​and our experiences.