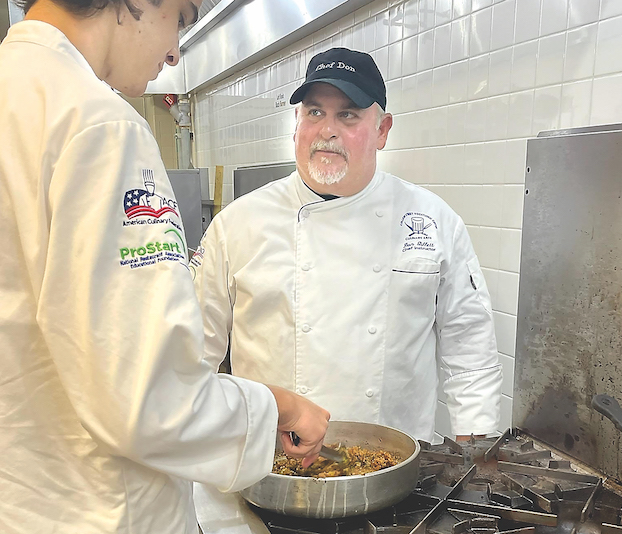 Don Gillett with one of his cooking students. (Special for the American press)

Chef Don Gillett, a native of Lake Charles, began his cooking career 36 years ago at Chez Oca, named after its owner, Chef Fernando Oca, a French Basque. Gillett has worked as a chef at the Hyatt Regency in New Orleans, Regatta of Falmouth in Falmouth, Mass., Hillsboro Club in Ft. Lauderdale, Florida and the City Club, Harrah’s Casino and L’Auberge Casino in Lake Charles. He owned two local restaurants here, Chateau Nouveau and The Vineyard and Free Style Munchies Food Truck.

Chateau Nouveau and The Vineyard was a gourmet restaurant located where La Truffe Sauvage is now located. From 1991 to 2000, he served the European continent with Southern Flair.

“The kitchen’s roots were in the classic French style,” Gillett said. “It was a white tablecloth and waiters in a tuxedo-style restaurant.”

Chez Oca, the City Club, Harrah’s restaurants and the Château Nouveau are no more. Gillett’s food truck was damaged by hurricanes and recently sold. But, he is here. And he’s still in the kitchen training the next generation of chefs at the College Street Vocational Center. His own formal culinary education began at the New England Culinary Institute in Montpelier, Vermont, one of the top schools of its kind in the United States.

“I attended NECI because it was all hands-on learning in real restaurants open to the public and the student-teacher ratio was low,” Gillett said. “It was like training camp.”

He admitted there were some things he learned back then – he was 21 – that he hadn’t used until now to teach cooking in high school.

“Cooking is about theory, algebra, physics and chemistry,” he said. “That’s all a recipe is, an algebraic word problem. The measurement of ingredients is math and the procedure is chemistry and physics.

He loves teaching almost as much as he loves cooking.

“Cooking has always been my passion and I love seeing the students get excited about the finished dishes they prepare. Besides teaching them the techniques, I try to make it fun for them,” he said.

He sees the potential in every student, but the creatives stand out.

“Students who are artistic are easily recognizable. They are creative and think outside the box. They ask, what if we add this to a dish? Will it work? It shows they have what it takes to succeed, to take food to the next level.

Gillett described what it takes to become a great chef: First, a chef must be comfortable in the kitchen and be able to follow a recipe without stress. He makes sure they’re ready to go out into the world and work in a commercial kitchen by throwing them a curveball every once in a while.

“Above all, a great chef must be willing to learn,” Gillett said. “The culinary world changes every day. A leader must be able to change and evolve with him. Improve the old and create something new. This is what gives your guests the wow factor.