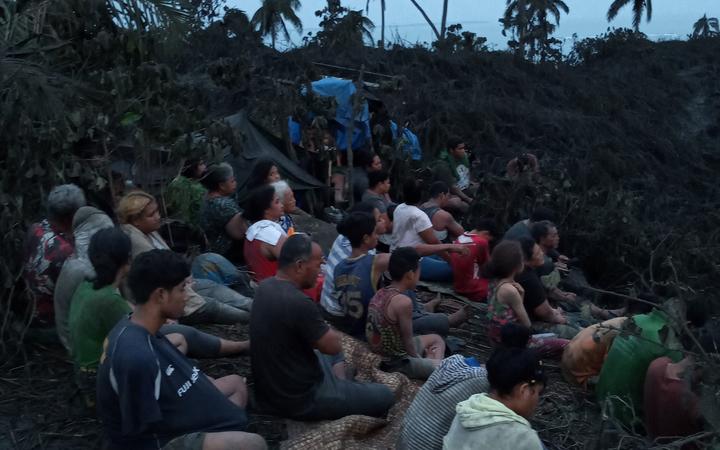 Evacuees from the outer islands of Tonga are welcomed to Tongtapu

Authorities in Tonga are working with local telecommunications companies to expand network capacity in the kingdom following a volcanic eruption and tsunami.

Three people were killed in the disaster which affected tens of thousands of Tonga.

Water, food and shelter are still the priority in the recovery with at least 150 people from the worst affected outer islands relocated to the capital.

Our PM @totisova welcomed the arrival of the people from Mango Island who were evacuated to Nomuka, the PM and Cabinet were at the Tonga Royal Navy Base – Masefield. The kāinga were brought onto Voea Ngahau Koula in Nuku’alofa for safety and shelter. Courtesy of Mr. Palu MOH. pic.twitter.com/pAbj6tir3q

Speaker of the Legislative Assembly Lord Fakafanua said a touching welcome was given to the evacuees on their arrival in Tongatapu, starting with a church service.

Lord Fakafanua also urges families abroad, who have yet to contact their loved ones, to keep trying, as work continues to improve and repair telecommunications in the kingdom.

“The New Zealand and Australian High Commissions on the ground have, together with the Red Cross, put systems in place to allow you to check on your loved ones if you still haven’t heard from them. .

At the same time, texts and calls are now available, but it is easier for those in Tonga to reach us abroad,” he said.

Re-establishing ties with Ha’apai and Vava’u

Digicel Tonga said a team of engineers will travel to Kao Island today to repair a microwave link that will restore mobile communications to two island groups in Tonga.

Telecommunications remain cut off in the Ha’apai and Vava’u group of islands in Tonga, with satellite phones being their only means of contacting the outside world.

Meanwhile, Air New Zealand’s first flight landed at Fua’amotu International Airport in Tonga today after a large ashfall was cleared from the runway.

It took off from Auckland at 9.20am carrying cargo including fresh water, medical supplies, clothing, bedding, urgent machinery and car parts.

Flight NZ1172 is expected to take off from Tongatapu this afternoon, with cargo and passengers on board.

Nearly two weeks after the volcanic eruption and tsunami, hundreds of families are sending emergency supplies to people struggling with basic needs.

More than a thousand drums, weighing up to 150 kilograms each, have been packed into 22 containers so far.

The final push is underway at Mount Smart Stadium in Auckland to complete loading the remainder before the Matson ship departs this evening.

He asks members of the Tongan community who have been unable to send aid to their families to be patient – as getting things done is slower now that New Zealand is in the covid red frame.

The vessel is due to arrive in Tonga on Saturday.

More than $60,000 has been raised in an appeal launched in New Zealand to help children in Tonga return safely to school for the start of the school year next week.

Save the Children will use funds from the appeal to set up safe spaces for children to learn and is shipping essential supplies to Tonga such as school kits, blackboards, schoolbags, as well as large tents to use as classrooms. temporary class.

Severe damage to some schools and complete destruction to others threatens to delay the return to school for thousands of Tongan children next Monday.

Save the Children New Zealand chief executive Heidi Coetzee said the $62,000 raised will also be used to replace textbooks and school materials.

Two planes were sent by New Caledonia to help with humanitarian aid in Tonga.

A Falcon 200 Guardian conducted a reconnaissance flight over remote areas of Tonga on Tuesday.

The mission of the reconnaissance flight was to take pictures of isolated islands surrounding Tonga to inspect the level of damage.

“These photos will only be sent to the Tongan authorities and are the property of the Tongan government,” said French army communication Karine Desfolies.

#Tonga | @FANC_Official & @ALPACIFRAPACOM prepare the emergency delivery of humanitarian cargo by air and sea, to help the people of Tonga after the volcanic eruption. pic.twitter.com/LNmZwGdRru

“The operations are now in the first phase of emergency relief and we are now in the second phase, where we are delivering material for the shelters.”

A transport plane dubbed “Casa transporta” is transporting goods to Tonga on Wednesday. It will mainly carry water jerrycans and tents, says Desfolies.

The United States, through the United States Agency for International Development, USAID, is providing an additional US$2.5 million in humanitarian assistance to support those affected by volcanic eruptions and tsunami waves in Tonga .

USAID will also work through partners to address food security, agriculture, livestock, and shelter needs among the most affected populations.

Dream of becoming a doctor at an affordable budget