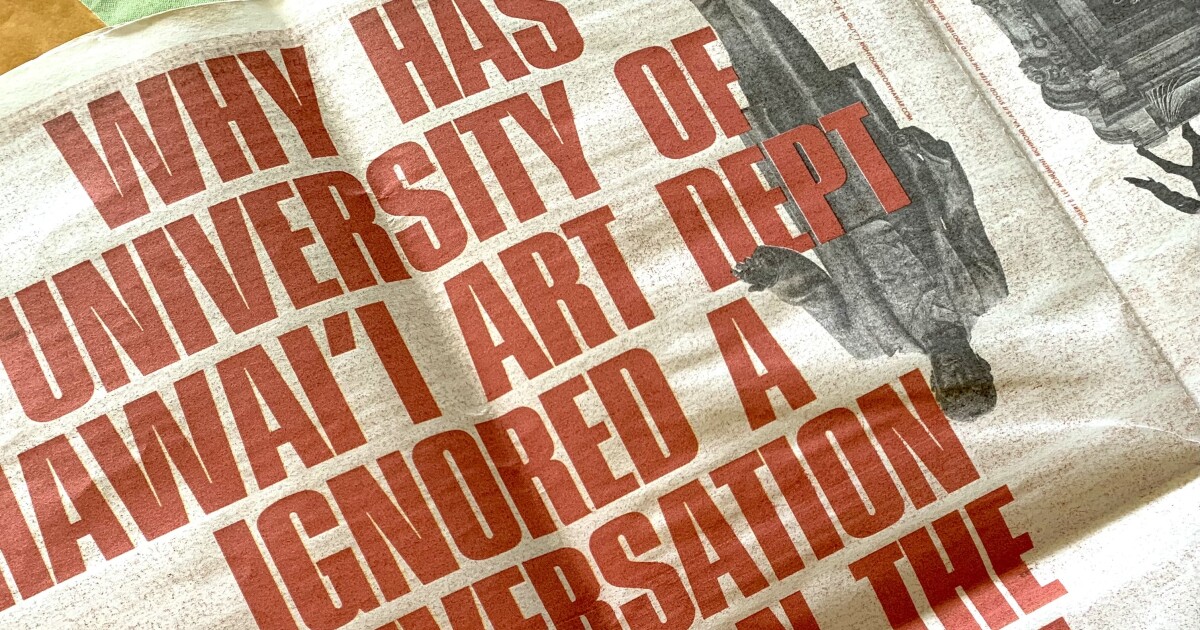 Last summer, the Black Lives Matter movement sparked national debate and internal thinking among businesses, governments and other institutions. The same was true for the academic departments of the University of Hawai’i system.

“Why has the University of Hawaii Department of Art ignored a conversation that is on the main stage of the global art dialogue?” “

This is the question posed by a newspaper published on the occasion of Indigenous Peoples Day on October 11. “Decolonize” is in large print, with text and graphics outlining avenues for change in the art department.

“I just didn’t expect it to have such a broad impact, especially on the student body, across all disciplines, that it has had,” said Rebecca Goldschmidt, 2020 MFA graduate.

Goldschmidt is one of the organizers of the journal, which began last year with a letter from 25 recent graduates of the art department.

“We have had alumni contact us just to say, ‘I’m sorry that hasn’t changed. “Someone from a class in the 80s said, ‘This is the same thing we were working on back then!’ Says Goldschmidt.

Goldschmidt says organizers want the art department to address a number of issues. Among them, obtaining a faculty that is not predominantly white and western, actively seeking diversity and inclusiveness, fostering culture and gender sensitivity, facilitating interdisciplinary work within the UH system, and engaging more deeply with the community at large.

They also want to see clear processes for resolving issues.

“One of the benefits of this conversation is that it gave us a starting point,” said Chinese art historian Kate Lingley, chair of the art department at UH Manoa.

She agrees that faculty in the department have struggled with these and other issues.

“What concrete steps can we take to effect change now? One of the things that came out of the discussion on Friday was that we can’t change everything without learning first. So it’s happening.” , Lingley said.

There is a resolution to pursue additional anti-bias training and articulate values ​​and ideals. There is a group that is looking at anti-bias teaching methods and criticism practices, and how to extend interdisciplinary study.

Lingley says one of the problems stems from a lack of staff. When she joined the art department in 2004, there were over 20 faculty members. Now there are 16, plus a gallery manager, and all the blankets for the support staff that have been lost.

“The budget cuts in Mānoa and the hiring freeze over the past few years have been a bit of an obstacle to substantive change. We are very disappointed, for example, that our post in Pacific Art History remains vacant. Bringing in someone with that expertise would provide the opportunity to address some of the issues raised in the letter, ”Lingley said.

Lingley says that when professors leave a post for any reason, a new request and rationale must be made for the post before a new hire can take place.

“One of the things that distracted us last year was the Mānoa Budget Committee’s proposal to stop accepting students for a period of time into our art history graduate program. that this could be the first step in the cancellation, ”she said. noted.

Lingley stresses that small programs in universities must continually justify their existence.

“Art is so often the canary in the coal mine when universities shut down. People say, ‘What is this for?’ But since we are talking about social justice, let’s talk about access to education as a matter of social justice. . We want to maintain these programs because otherwise the only people who can study art are those who can afford to leave the island. “

The art department is facing budget cuts and possibly an existential crisis while trying to move forward. Lingley says any progress will take time.

“There are bigger issues about how the university is funded and how tuition fees are allocated, which may be more important than this conversation, but it’s possible that voices outside the ‘university speak louder,’ she told Hawai’i Public Radio. .

A member of the art faculty examines how a facilitated discussion between critics and art department professors might work.

Simply as a work of art, the recent large format deserves to be recognized. The word “Decolonize” is in large print, with text and graphics presenting arguments in surprising and compelling ways.

Thad Higa designed the eight-page page, which is also signed by CFT, which otherwise remains anonymous.

On an inside page, in red, Higa repeated this line over and over: “I am constantly learning and unlearning my ideas about white supremacy and racism.”

“How do you feel to read this over and over again?” Higa asks.

Higa calls this the real question we all need to ask ourselves. The newspaper “Decolonize” has people talking, at least, according to Goldschmidt.

“We have seen current students say that in student accommodation they meet and meet and talk about issues. I have seen people say that students at ROTC use part of the language and refer to the newspaper. both days we get a message or two that is “hey, i just saw this, or i just saw this poster or i took the newspaper, i had no idea”, and stuff like that ” said Goldschmidt.

You can find the newspaper “Décoloniser” online by clicking here. Submit your comments and find more resources at decolonizeuh.art

We’ll also have a more in-depth discussion this week on the 11am Aloha Friday conversation on HPR-1.