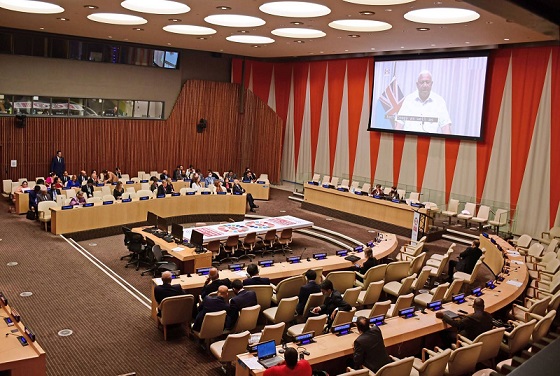 Fijian Prime Minister Voreqe Bainimarama said the introduction of free education has had a huge impact in bridging the learning gap between children in rural, maritime and urban areas.

He made the comment while addressing leaders, think tanks and key stakeholders virtually at the three-day “Transforming Education Summit” – convened in response to a global education crisis on the sidelines of the 77th session of the United Nations General Assembly in New York yesterday.

Mr Bainimarama said Fiji’s commitments to transforming education included a revolution in the digitalization of education, a greater focus on problem solving and building the skills and competencies needed for a modern society based on knowledge.

He said the government had also provided free textbooks and subsidized transport to school for low-income students.

“Since then we have achieved universal access to primary education in Fiji for all children of all genders and billions of dollars in new funding has been provided to higher education through loans and grants” , Mr. Bainimarama said.

“Year-on-year, approximately 18% of Fiji’s national budget goes directly to education, with every dollar invested in a more united, informed, prosperous and sustainable Fiji.

“The dividends are paying off: the generation empowered by free education is now entering our workforce and helping to lift Fiji’s double-digit economic growth out of the pandemic.

He said the government is committed to rebuilding every school to withstand the realities of a hotter and more dangerous world, having redesigned every structure to withstand cyclones.

“The Fijian government is also committed to reviewing its apprenticeship programs; bring in new resources to develop an expanded range of programs that build skills and competencies relevant to a modern economy.

“We are committed to creating a safe learning environment for every child through continued efforts to build climate resilience, zero tolerance for discrimination and violence, and increased resources to support vulnerable children who may experience violence at home or in their communities.

“We are committed to deepening the partnerships that make all of this possible; partnerships with teachers, institutions, think tanks, the private sector and governments.

Mr. Bainimarama also called for consistent support from the UN system for deeper and broader engagement with its development partners, and faster and broader access to concessional finance.

What happens if Vancouver Council does not approve the budget