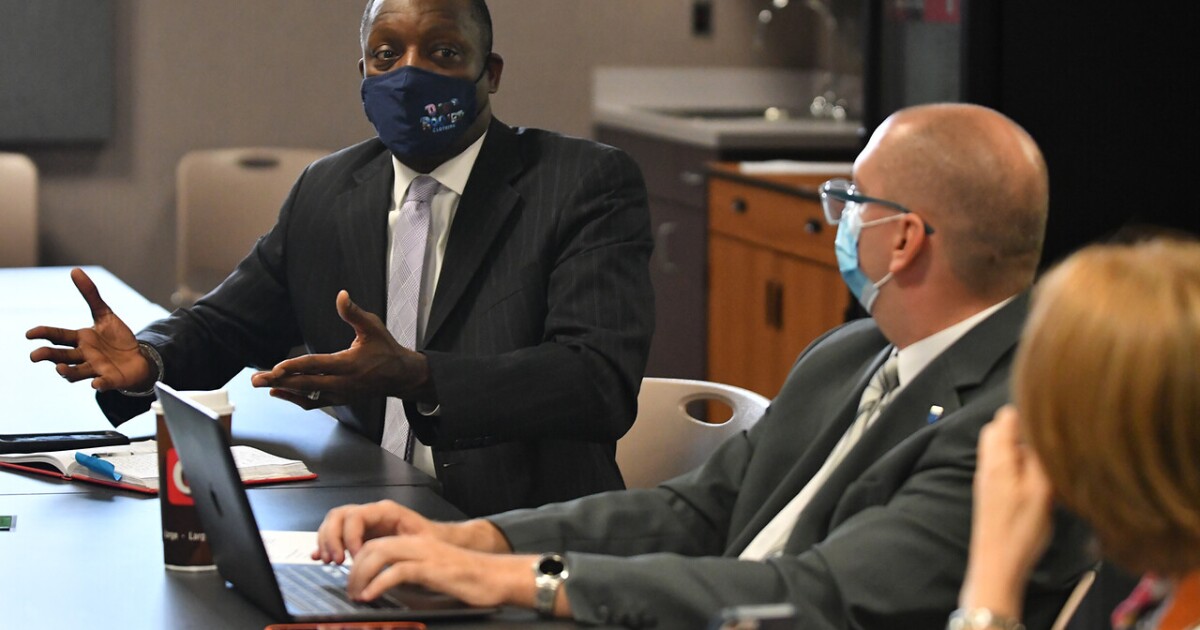 On Tuesday morning, the Missouri State School Board of Education voted unanimously to grant full accreditation to the district at its monthly board meeting.

This decision marks a watershed moment for KCPS, which has been provisionally accredited since 2014.

Superintendent Mark Bedell told the board after their vote that the work to improve the district was not yet complete.

“We’re going to celebrate today because we deserve it, but tomorrow we get our sleeves back. We have a lot of work to do and I’m competitive, ”said Bedell.

The district lost its accreditation in 2011 after undergoing a turnstile of superintendents and the closing of half of its schools.

Since state assessments were halted by the pandemic, the Missouri Department of Elementary and Secondary Education‘s recommendation was based on a number of other factors.

Bedell has been pushing for full accreditation since being selected as district superintendent in 2016.

His leadership was cited by Carol Hallquist, who represents Kansas City on the state board of directors.

She reflected on her interview for the job, when he showed up late because he was busy communicating with residents across town.

“That kind of attention on the pitch really allowed him, I think, to involve the community and a really good board,” said Hallquist. “He’s the longest-serving superintendent in the past 53 years, and leadership and tenure make the difference. “

The neighborhood has reached the minimum state required score for full accreditation in Bedell’s first year on the job, but DESE wanted to see sustained progress. KCPS struggled to reach status markers in consecutive years after.

Ahead of the vote, Board member Kerry Casey raised questions about the assessment’s focus on growth rather than meeting standards.

Board members said while there was room for improvement, Tuesday’s presentation demonstrated the district’s steady progress.

Board member Peter F. Herschend said he was on the board and recalled the district when he was not accredited.

“We have made insufficient progress than it should be, but it is such incredible progress for me that I am thrilled and will be voting for full accreditation and will also expect better results on the next year and the following years, “says Herschend.

Ahead of the state meeting, the district was nationally recognized in a report by the University of St. Louis PRIME Center for helping students improve in English and math. The report stressed the need to focus on student progress rather than on achievement.

KCPS Board Chairman Nate Hogan, a Kansas City Public School alumnus, told the board that many students attending the district experience trauma as he did in his youth.

“I’m an example of how focusing on growing students can deliver lifestyle change results,” Hogan said. “For too long, we have let too many students focus only on the kids who are doing well at any given time on a standardized test.”

Bedell asked the board for its continued support in its goal of maintaining accreditation, saying school districts are not agile enough to meet the demands of the current workforce. He stressed the need for flexible hours for students in the wake of the pandemic.

The move also comes as the district rolls out its Blueprint 2030 strategic plan, which Bedell says will “reinvent teaching and learning” for the district’s future.

Mark the decade of Indigenous languages ​​by formalizing Inuktitut in Canada: Inuit representative at the UN