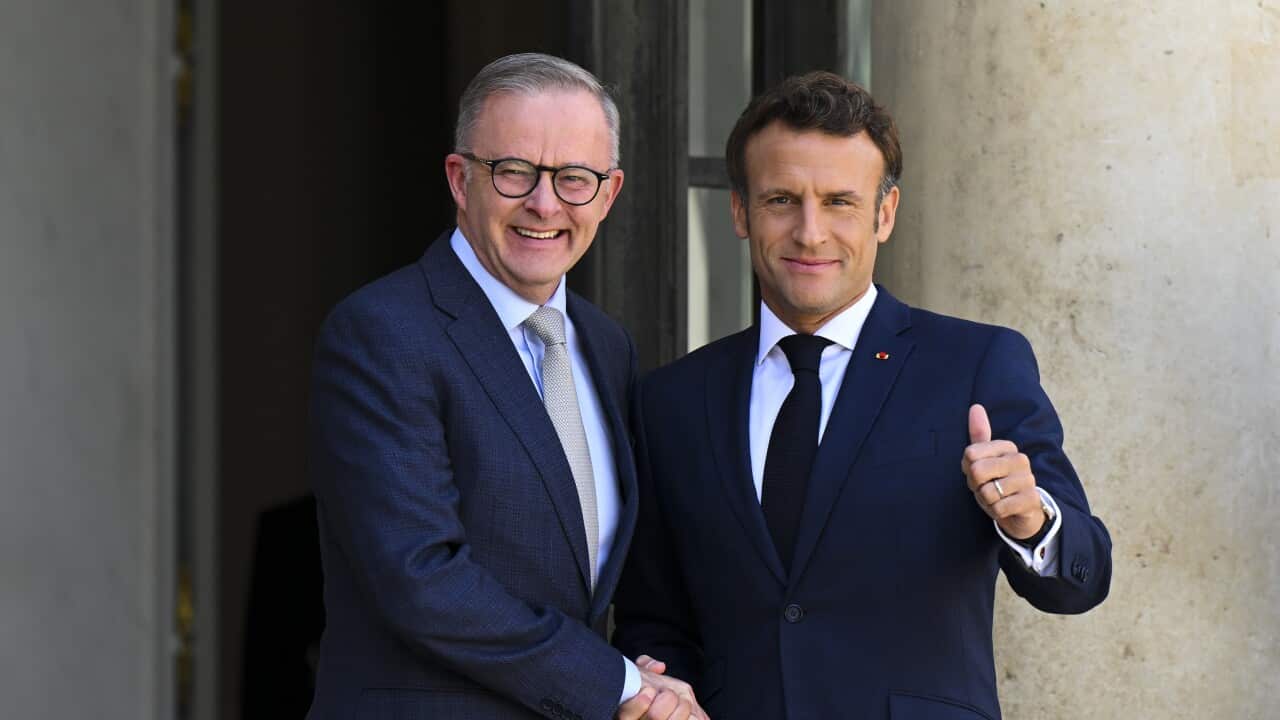 By Thomas Howard Last updated Jul 2, 2022
Share
French President Emmanuel Macron does not want an apology from Prime Minister Anthony Albanese for the handling of the submarine debacle because he “is not responsible for what happened”.
Mr Macron embraced the new prime minister after he arrived at the Elysee Palace in Paris on Friday, for their first official meeting after Australia dropped a $90 billion submarine contract last year.

Mr Macron was asked if Mr Albanese should apologize for his handling of the deal, but the French president indicated the relationship had been mended.

“We will talk about the future, not the past,” Macron said.
“He (Mr Albanese) is not responsible for what happened.”
The decision of the previous coalition government to abandon the contract with Naval Group in favor of acquiring nuclear-powered submarines under the AUKUS partnership with the United Kingdom and the United States has damaged the relationship.

France temporarily recalled its ambassador from Canberra and Mr Macron told Australian reporters that former Prime Minister Scott Morrison had lied to him.

Mr Albanese traveled to France at Mr Macron’s invitation in a bid to “reset” relations between the two countries.
Australia will pay the French company approximately $830 million in compensation for the canceled contract.
Mr Macron warmly welcomed Mr Albanese on his arrival at the palace and placed his arm around his back.

He also kissed Mr Albanese’s partner, Jodie Haydon, on the hand before introducing them to his wife Brigitte.

Ahead of the meeting, Mr Albanese hailed France as a ‘crucial partner’ for Australia as he promised a ‘new chapter’ in relations between the two nations.
Mr Albanese said he recognized France was not only a “great European power” but also an “Indo-Pacific and global power”.
“I know that France’s active engagement in the Indo-Pacific will be key to overcoming the challenges facing our region,” he said.

He said Australia and France “share a strong commitment to more ambitious action on climate change and the clean energy transition”.

The leaders discussed action on climate change, the war in Ukraine, Pacific policies and expanding cultural exchange between the two countries through the arts and education.
Mr Macron said France and Australia would be taken to “new horizons” through repaired relations.
Earlier, Mr Albanese said meeting Mr Macron on July 1, the start of a new exercise, was an “appropriate moment” to usher in a “new dawn” between Australia and France.

The Prime Minister said the country’s lack of action on climate change and the “break” in relations with France had stalled negotiations for a trade deal with the European Union.

What happened between Scott Morrison and Emmanuel Macron?

Diplomatic relations between Canberra and Paris were tested last year when Mr Morrison announced that Australia would enter into a security pact with the United States and the United Kingdom – AUKUS – and buy pennies -nuclear sailors.
Australia was already under contract with the French company Naval Group, which supplied 90 billion dollars of conventional submarines.
Mr Macron accused Mr Morrison of lying about the deal.

When asked by reporters if he thought Mr Morrison had lied about engaging with the US and UK on the deal, Mr Macron replied “I don’t think so, I know”.

French Foreign Minister Jean-Yves Le Drian called the move a “stab in the back” and temporarily withdrew France’s ambassadors to Australia and the United States.
Mr Morrison denied lying about the deal and said contracted subs were not enough.

“I was very clear that conventional submarines were not going to be able to meet our strategic interests and that we had to make a decision in our national interest,” Mr Morrison said.

Mr Morrison failed to restore relations with Paris before ending his term as Prime Minister. Following the result of Australia’s 2022 federal election, Mr Le Drian said: “I can’t help but say that losing Morrison suits me very well.”
He added that Mr Morrison’s actions over the submarine deal showed ‘brutality and cynicism, and I would even be tempted to say unequivocal incompetence’.
Shortly after becoming Prime Minister, Mr Albanese announced that Australia would pay Naval Group around $830 million to settle the abandoned defense contract.
Mr Albanese said he had a “warm” and “constructive” conversation with Mr Macron after his election, and has since been adamant about repairing relations between the two countries.