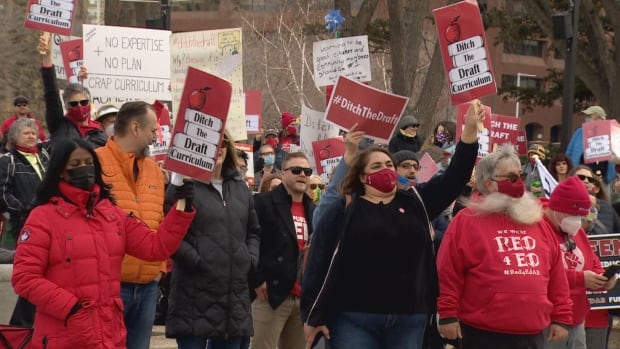 Dozens of educators, parents and children gathered at the Alberta Legislature on Saturday to protest the implementation of the new elementary curriculum, part of which is expected to be taught to students this fall .

Ditch the Draft Curriculum events were held in Calgary, Edmonton, Grande Prairie, Lethbridge, Medicine Hat, Red Deer and the Vermillion-Lloydminster-Wainwright area. Participants rallied against the new K-6 curriculum, which has been criticized for months.

“Enough is enough. This program is not worthy of our students,” said Carla Peck, a social studies professor at the University of Alberta, who helped organize the protest at the Legislature. .

“The quality is not good enough; it will set back education in Alberta – and the students who receive that education – by 50 years or more.”

The provincial government started revising the K-6 curriculum in 2019, then began drafting a new one in the summer of 2020. The drafted program was open to the public for review and comment until February.

Many have criticized the process as well as the content of the curriculum, particularly the social studies portion, which educators, parents, and Indigenous leaders and elders have called racist, Eurocentric, age-inappropriate, and uninformed.

The provincial government has since rewritten the draft social studies curriculum.

In January, the province formed an advisory group — made up of 17 bureaucrats, superintendents, school trustees and educators — to determine how best to implement the new curriculum in the fall.

Protesters on Saturday hope their pleas will spur the Alberta government to reconsider continuing the process and ultimately craft a different program for students, Peck said.

“This curriculum is ultimately about the future of our province, the future that our students will have and grow into,” she said, noting that curriculums can last 20 years. or more.

“It’s really important – the quality of the curriculum that we put in the schools – and we have to get it right.”

Peck also wants teachers to have more of a say in the writing process, she said.

Heather Taschuk, a teacher and parent of a Grade 3 student, took to the legislative grounds on Saturday. She was holding a pink sign that suggests the proposed curriculum forces students to memorize what they are taught, instead of giving them room to explore on their own.

After going through the past two years, many teachers view continuing the curriculum project as a breaking point, she said.

“When we know that’s not the way to go, we don’t have a membership. We don’t want to release that when they’re already sold out,” Taschuk said.

The Alberta government respects the right to peaceful protest but is sticking to its year-long “transparent and open” curriculum review process, said Katherine Stavropoulos, press secretary to the minister of education. Education Adrian LaGrange, in a statement to CBC News.

“Parents have made it clear that they expect our education system to provide their children with a solid foundation of essential knowledge and skills and that is exactly what our government intends to provide,” said Stavropoulos.

The government is considering all feedback, public engagement and classroom piloting, regarding the content of the draft curriculum, Stravropoulos added.

Jason Schilling, president of the Alberta Teachers’ Association, attended the protest in Edmonton, supporting concerns raised by Peck and other protesters.

“A lot of bands say, ‘No. We don’t want that in our schools. And we don’t see the government listening to those concerns,” Schilling told CBC News.

He is also concerned about the extent to which the programs have been tested in classrooms, before they are rolled out.

Last spring, school authorities could volunteer to participate in a pilot project where teachers could choose one or more subjects from the new curriculum to teach in classes from September to February of the current school year.

A small number of teachers chose to teach subjects other than English, Maths, Physical Education and Wellbeing. French language subjects have not been the subject of a pilot project.

The province is taking a “balanced and measured” approach to implementing the program in schools, based on advice from its advisory group, Stravropoulous said.

Last month, Education Minister Adriana LaGrange announced that students in Kindergarten to Grade 3 will learn the new math and English curricula in September, but students in Grades 4 to 6 year will not receive the new curriculum in these subjects until the following one. school year.

However, all K-6 students will learn the new Wellness and Physical Education curriculum in the fall.

By May, the provincial advisory group will make recommendations on piloting and implementing curricula for fine arts, science, social studies, early French language and literature, and arts and culture. literature in French immersion, says the province’s website.

Schilling didn’t hear much feedback from teachers involved in writing the program because they were coerced into signing a year-long nondisclosure agreement, he said.

A bridge between 2 worlds: BC duo create music for people of all identities, abilities