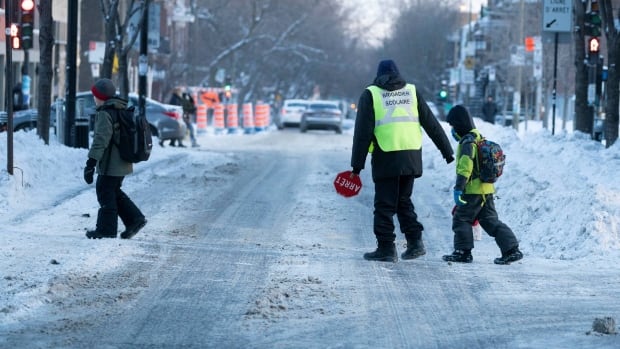 Samuel Gagnon says his seven-year-old daughter told him her class is sometimes so cold she wants to cry.

Gagnon, who lives in Chateau-Richer, north of Quebec, said her daughter’s school left the windows open in an effort to prevent the spread of COVID-19.

But after sending his daughter to school on a day when it was -40 with the wind chill, he decided to take action, calling his local MPP and posting a Facebook video encouraging others to do likewise.

“We have a serious problem, our children are freezing in our schools, and that is unacceptable,” he said in an interview on Friday.

For Gagnon, the solution is simple. He thinks that Quebec should install air exchangers in classrooms, which is done in other provinces.

Heidi Yetman, president of the Quebec Provincial Association of Teachers, a union that represents teachers in English-language schools in the province, said that while the Ministry of Education has installed carbon dioxide detectors in approximately 50% of classrooms, it has not acted to improve air quality.

Quebec said it plans to install air exchangers in some classrooms, but Yetman said she doesn’t know how many of the 400 devices the province says it has received have been installed.

Asked to comment on Gagnon’s video, Florent Tanlet, spokesperson for Quebec’s Minister of Education, Jean-François Roberge, emailed a link to a January 21 press release issued by the Ministry of Education. saying that teachers could close the windows in cold weather.

“The recommendations of the experts are clear: good ventilation is in addition to the measures already in place, such as wearing a mask, distancing and isolation measures in the event of COVID-19,” Roberge said in the press release.

“As a former teacher myself, I am aware of the importance of opening windows in classrooms, but not at the expense of student comfort, especially in very cold weather.”

Yetman said the government was sending mixed messages, telling teachers to open the windows if the carbon dioxide level was too high, while telling them to keep the windows closed if it was too cold.

The ministry said that as of January 25, 96 classes in public and private schools were being conducted remotely and two schools were completely or partially closed due to COVID-19.

In-person classes at Quebec schools resumed Jan. 17, though many schools didn’t reopen until the next day due to a snowstorm.

Olivier Drouin, a father of two in Montreal, said the province is releasing less data than at the start of the pandemic, leaving parents in the dark.

“Quebec has stopped publishing case numbers in schools. They even stopped notifying parents if there is a positive case in their child’s class,” said Drouin, who has been tracking COVID-19 cases in schools since August 2020 with a project called COVID Schools Quebec.

Drouin said he is frustrated that the Quebec government no longer makes data on the number of cases in schools public and has “no clear action plan” to improve air quality in schools.