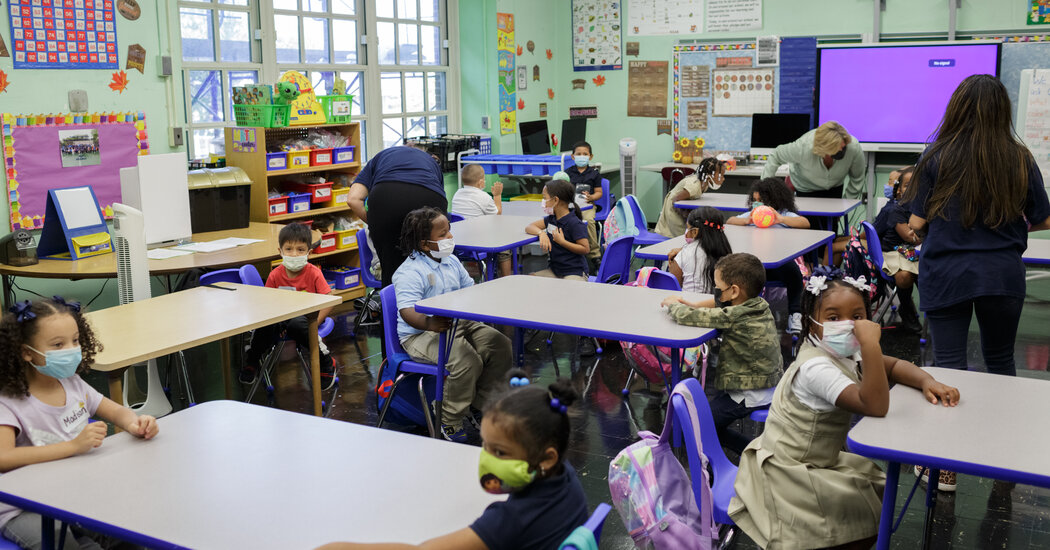 Student retention in schools in New York, the nation’s largest public school system, has increased slightly since the pandemic began, according to a report released Tuesday. But data from the report suggests enrollment of new students is down in the city, particularly in younger grades, adding to a national trend.

Overall, the number of students enrolled in the city’s more than 1,800 public and charter schools fell by about 50,000 between fall 2019 and the end of 2021. A drop in new course enrollments of the first year of this period seems to have been a major factor; full data is not yet available for the second year. There are now about one million children in the city’s public schools.

Retention rates for pre-kindergarten students have fallen across all demographic groups, the new report finds, and especially among the city’s least vulnerable students: high-income white children without disabilities who speak English as their first language. .

Among K-12 students, the trends were more mixed. The study found notable decreases in retention among young white students — the rate dropped by more than four percentage points among white students in their third year or below — and increases among older black and Hispanic students, low-income students and students in temporary housing, especially those enrolled in high school.

The report, which compared enrollment data for returning students in the 2020-21 school year with data from the previous year, portends challenges for Mayor Eric Adams’ administration as the budget of education in the city depends on the number of students enrolled. Among these challenges is the fact that schools are attracting fewer new enrollees. The proportion of newly enrolled students decreased in all grades, and particularly in the first and ninth grades, where it fell to 5.9% from 9.3% the previous year.

The relative stability of retention rates at schools across the city came as a surprise, said David Bloomfield, professor of education at CUNY Graduate Center and Brooklyn College. He said the data contradicted the impression of many experts that the pandemic and long periods of remote learning could cause many students to drop out temporarily.

“Although not necessarily predictive of the future, it presents a stark contrast to expectations and the common narrative that many children have simply not returned,” he said.

He noted, however, that the report measures registrations, not attendance.

Professor Bloomfield said the report did not assess the effects on schooling of factors such as the national birth decline or the city’s failure to require parents to send their children to school before the age of 6; many parents may have put off doing so in the early months of the pandemic.

Given such unknowns, he said, it is difficult to draw concrete conclusions about future enrollment or retention trends. Still, he said, the new data suggests the city’s schools won’t have to prepare for the steep loss of students that some experts feared.

US nuclear weapons in Europe are unacceptable to Russia, says Sergei Lavrov