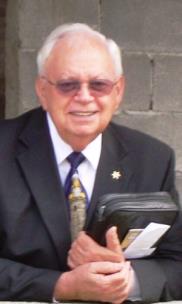 Roy Edwin Lowe passed from this life to his Eternal Reward on December 9, 2021.

Roy was the youngest of six children born to Daniel Warren and Stella Copeland Lowe.

He was predeceased by his parents, four brothers, a sister and a daughter, Cathy.

Roy was discharged from the Air Force in January 1955 and enrolled for the spring term at West Texas State College where he graduated in 1958 with a degree in music education.

In February 1956 Roy married Charlotte Ann Call of Pampa, Texas, also a student at West Texas State College. After Roy’s graduation, they moved to Dimmitt, Texas, where Roy served as the high school choir director and the Methodist Church choir director for five years. During this time, he completed the hours of flight training necessary to earn an instrument and instructor rating.

Over the next several years, Roy served as a flight instructor and ground instructor for Spartan Aeromotive of Tulsa, Red Bird Airport and Love Field in Dallas, TX, and Tennessee Airmotive of Chattanooga. He went on to serve as a sales representative, a consultant for the Chattanooga Concentrated Employment Program, and a teacher in Chattanooga Public Schools.

Roy has appeared in numerous theater productions in Chattanooga, the Backstage Theater, the Chattanooga Little Theater, and Tennessee Temple University.

In April 1978, his life changed when he met his Savior. He resigned his teaching job this spring and enrolled at TTU. He attended Tennessee Temple University where he earned a master’s degree in Bible from Bible College and then taught English for three years.

In 1982 Roy and his wife, Charlotte, were accepted as missionary candidates by the International Council of Jewish Missions and after a period of deputation they moved to Malaga, Spain, where they attended a language school before relocating. in Barcelona to work. After four years in Barcelona, â€‹â€‹they returned to Fuengirola, MÃ¡laga, where Roy founded an independent Baptist church in 1989.

In 1999, Roy was appointed Hispanic Director of the IBJM, and the Lowes began an almost 20-year project to bring the gospel to Jews in all Spanish-speaking countries, personally witnessing and teaching Jewish missions in Baptist churches. independent and Bible colleges wherever Spanish is spoken. God has blessed this ministry with saved souls and Hispanic men and women called to bring the gospel “first to the Jews and also to the Greeks”.

The family will receive friends on December 16 from 5 p.m. to 8 p.m. and from 10 a.m. to 11 a.m. on December 17 at the Lakewood Baptist Church. Reverend Ronnie Gilbert will lead the funeral Friday at 11 a.m. in the church. Interment will follow at Chattanooga National Cemetery at 1:00 p.m.