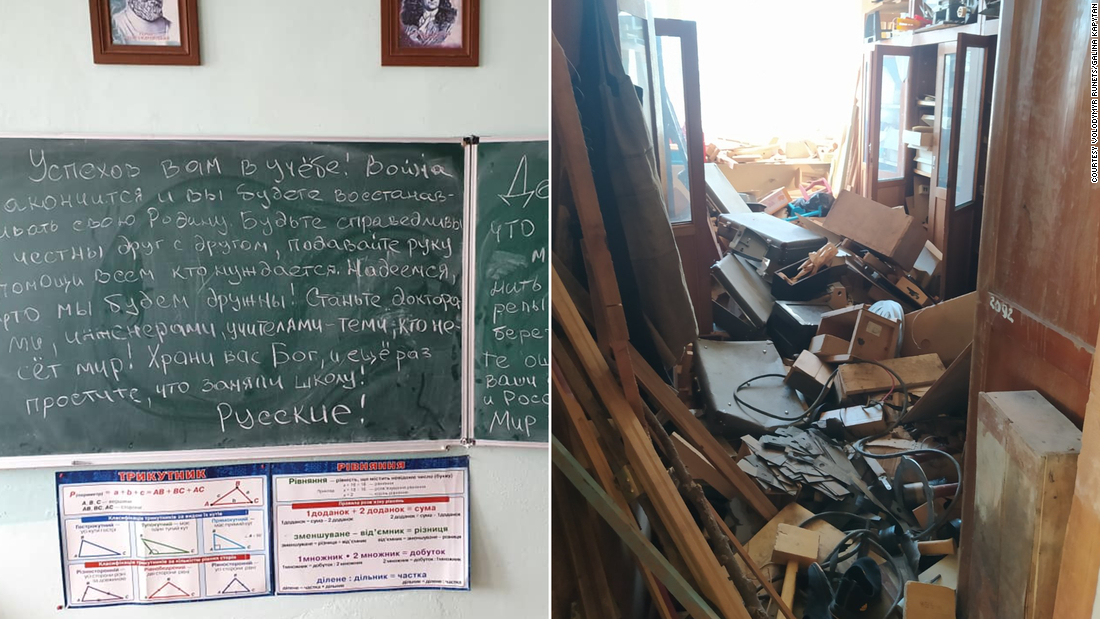 Inside one of the destroyed classrooms, written in chalk on a large green blackboard hung on the wall just below a portrait of Isaac Newton, was a letter addressed to the students and signed “Russians “.

He said: “Children, we are sorry for such a mess, we tried to save the school, but there was bombardment. Live in peace, take care of yourselves and do not repeat the mistakes of your elders. Ukraine and Russia are one people!!! Peace be with you, brothers and sisters!”

The note, written in Russian, as opposed to Ukrainian – the school’s language of instruction, was one of many left on blackboards and whiteboards scattered around the building. “We are for peace all over the world,” said another. CNN cannot independently verify who wrote the notes.

Mikola Mikitchik, the principal of Katyuzhanka Secondary School, told CNN last month that he felt disgusted when he found the notes.

“They wrote ‘Russians and Ukrainians are brothers’ and at the same time they robbed the school…they ruined the computers, they took out the hard drives, they took the laptops, the printers, they left nothing at school! This is barbarism and hypocrisy,” he said.

Mikitchik told CNN that three anti-tank mines, several stun grenades and machine gun magazines with bullets were found on the school grounds. The kitchen, recently renovated with new equipment which was used to feed more than 500 children daily before the start of the war, was completely destroyed.

According to an operational update released by Ukraine’s Defense Ministry on March 3, Russian troops controlled Katyuzhanka at that time, having established logistics camps there and in other villages in the area.

Katyuzhanka is a small village, but strategically important due to its position on one of the main roads leading to Kyiv. Satellite images from early March revealed a 40-mile (64 kilometer) Russian military convoy of tanks, armored vehicles and towed artillery in that area.

Mikitchik estimated that the material damage caused by the Russian troops – and in his mind there is no doubt that they were the ones who looted the school – amounted to around 5 million Ukrainian hryvnia ($170,000) and said he couldn’t imagine the students would be back any time soon.

“We hope we will be friends”

“Everything was removed. Even the cables were stolen. We had copper wire electrical cables and 100 meters of cable was stolen,” he said.

At the same time, another note left at the school read: “Be fair and honest with each other, give a helping hand to anyone who needs it. We hope we will be friends! Become doctors, engineers, teachers — those who bring peace!”

The notes scribbled on the blackboard in Katyuzhanka were among dozens of messages found in schools in previously occupied areas of Ukraine after Russian troops withdrew.

In Ukraine, photos of these notes have become a symbol of cruelty and the huge toll of Russia’s unprovoked aggression.

But in Russia they generated a very different response when they first appeared in April and quickly became part of the propaganda portraying Moscow’s assault on Ukraine as “liberation”.

Russia’s former culture minister Vladimir Medinsky even shared a photo of one of the notes, saying he was “touched” by his message.

In Novyi Bykiv, a village in Chernihiv area east of Kyiv, director Natalia Vovk also found a number of notes written on blackboards, many of them calling for peace and friendship between the Ukrainian and Russian peoples.

Novobykivsky General Secondary School was badly hit during the fighting. The roof was badly damaged by the shelling and all the windows were smashed, Vovk told CNN last month.

“The library is damaged. Textbooks are completely burned, not a single textbook remains. Desks are broken, materials have been taken away, computers have been removed,” she said.

Yet in many classrooms, notes calling for peace were left by Russian troops, she said.

“Let’s live in friendship!!!” was noted on another board, Vovk said. A photo from another class shows a sign that reads, “We are all Slavs. It’s not good for brothers to go [against each other] with a knife.”

Like Mikitchik, Vovk now lists the damage done to his school during the occupation.

“We had an interactive panel, which cost us 100,000 hryvnias ($3,700) and they stole it. Printers and laptops were stolen. What they couldn’t steal, they stole it. broke, rendered it unusable,” she said.

The Novyi Bykiv school building is shaped like a letter U, surrounding the school yard on three sides.

“It was convenient for them, they placed a rocket launcher in the center and launched rockets from the center of the school,” Vovk said, adding that the layout of the school and its basements allowed Russian troops to hide more easily from imminent danger.

“There are a lot of passages in the school: you can enter on one side and leave on the other and they were very comfortable with that. They even had a dining room there”, a- she added.

Vovk said she believed some of the messages left by Russian troops showed their personal desperation. Many expressed anti-war sentiments, she said, and at least five of the notes called for friendship.

There was an inscription that read “We all want to LIVE” with the word “live” written in capital letters, she said. Another said: “We don’t understand what we are doing here.

“I believe these notes show that they understood fate. Maybe they were waiting for death,” she said. “But they also thought about the fact that they would be punished for the harm they did. It seemed like the [writer] wanted to live, have a baby and do everything normally, but they realized that after all this they could not go back to a normal life,” she said.

“Putin is your president”

At the Zdvyzhivka high school in the village of Zdvyzhivka, northwest of Kyiv, another type of message was found.

“Putin is your president. Children, study hard, Russia needs educated citizens,” read a note found on a blackboard decorated with children’s drawings of different planets in the solar system.

A school employee, who wished to remain anonymous for security fears, said tripwire mines were discovered on school premises after the Russians withdrew from the area in late March.

Under Russian control, the Zdvyzhivka school became the headquarters of OMON, the special police branch of Russia’s National Guard, he said. Like Katyuzhanka, Zdvyzhivka is also located on one of the main roads leading to Kyiv from the north.

As in the other two schools, almost all the material in the Zdvyzhivka school was either stolen or destroyed.

“They smashed the children’s tables, destroyed the kindergarten, the windows are broken. They stole smartboards and laptops,” the employee said.

“We had a big LCD TV. They couldn’t steal it because it was too big. So they knocked it down and left it in the classroom,” the employee added.

On a blackboard near the broken television screen, another message was found written on a blackboard: “Forgive us!”