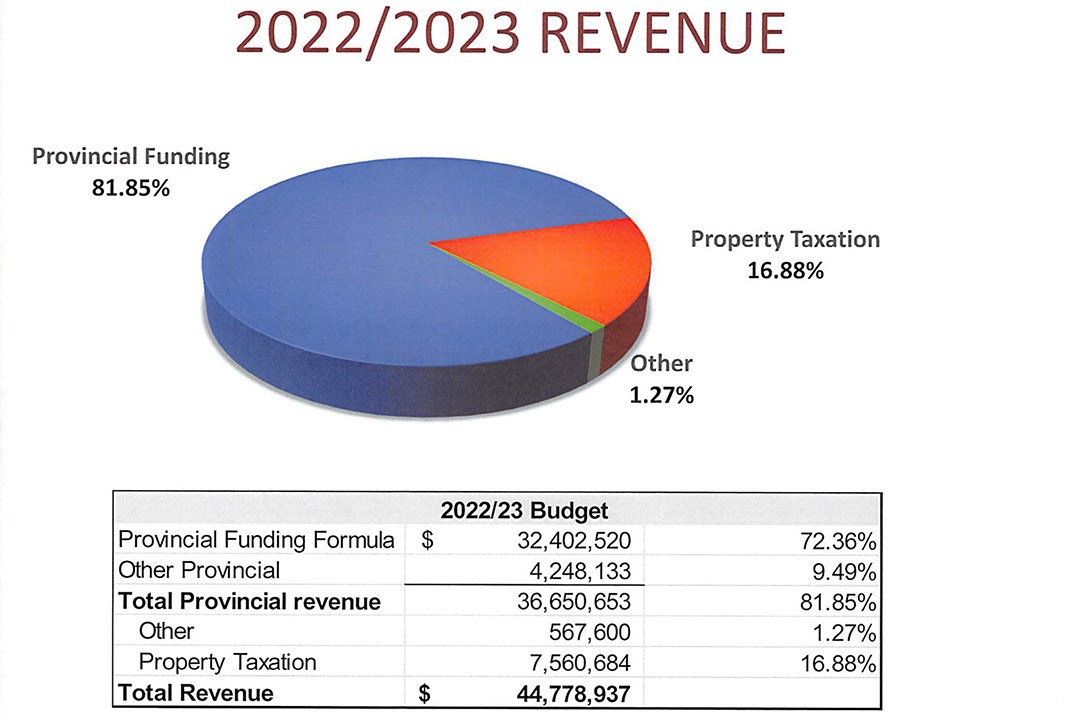 Mystery Lake School District’s overall budget will increase by 2.6% in 2022-23, but the amount of property tax revenue will remain the same as this year.

The proposed overall budget for Mystery Lake School District (SDML) is increasing slightly for the 2022-23 school year, but the amount funded by Thompson property taxes will remain the same.

The draft budget was presented to the public by SDML Secretary-Treasurer Kelly Knott via Zoom and Facebook on February 24.

Since the provincial government has ordered all school divisions not to increase their property tax claims, SDML will need to use more of its projected surplus at the end of this school year to cover the difference between the funding announced for the next year and their expected expenses.

The amount of funding announced for the district earlier this month will likely be reduced once in-year adjustments are made based on actual enrollment as of September 30, 2022.

About $36.7 million in revenue comes from the provincial government, while property taxes will bring in $7,560,937. $362,338 will be taken from the surplus at the end of June to make up the difference.

Knott has yet to calculate the rate per mill that will be needed to raise the required amount of money, as property values ​​were assessed in 2021 and the percentage increase or decrease in the value of taxable properties will affect the required rate.

SDML has benefited from the province maintaining some grants it planned to phase out and funding from the district for more students than its actual enrollment, but it still faces cost pressures due increases in heating and fuel bills, cost of living adjustments, contract wage increases and general inflation. The district has reduced the amount of paving of parking and entrance areas planned for schools in Thompson this year because the cost of paving has “skyrocketed.”

The projected surplus at the end of June 2023 is only about 2% of the overall budget, or $892,000. The surplus is used to cover differences between expenses and revenues the following year as well as for unforeseen expenses, such as recent emergency roof repairs needed at one of the district’s elementary schools, which cost $165,000.

“$892,000 isn’t a lot of money when we’re dealing with a teacher payroll that’s over $2 million a month,” Knott said. “It’s a scary place. But we are in much better shape than many other school divisions and we are still able to provide a balanced budget.

SDML has the second highest percentage of provincial funding in the province at 81.8%, so directives not to raise property taxes do not affect it as much as other school districts which receive a greater proportion of their revenues local taxes.

There could also be challenges in the future, as the province plans to introduce a new school funding model next year and the shift to provincial teacher bargaining could make it difficult for SDML, which has the highest minimum and maximum salaries for Class 5 teachers in any of Manitoba’s 38 school divisions, to attract teachers north. It is already difficult to attract teachers for specialized positions such as teaching French and the Cree language.

“As we enter provincial collective bargaining, how are we going to be able to recruit? Knott said near the end of the budget presentation. “What is our motivation or advantage to bring people north? »

The budget presentation can be found on the SDML website and can also be viewed on YouTube.

The directors of SDML will vote on the budget at their meeting on March 8.