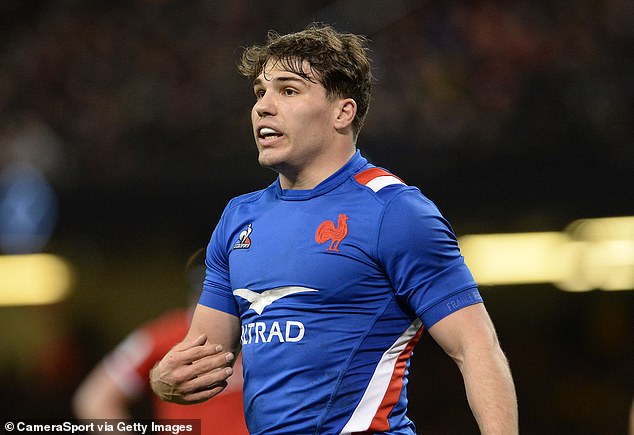 The 2021 Rugby Player of the Year winner is poised to lift France a grand slam in the Six Nations.

The 25-year-old will then look to lead his country to next year’s World Cup on home soil.

CLIVE WOODWARD: Hello Gareth, here we are right in the middle of another Six Nations and Antoine Dupont is once again the name on everyone’s lips. It’s been a very long time since I remember such universal recognition on a player. He is clearly quite an exceptional and inspiring scrum-half. He fascinates me but as a past master, what do you think of him Gareth?

GARETH EDWARDS: As you say Clive, what a player. He’s an unusual mix in that he can literally do anything. He is an extremely capable, intelligent and versatile rugby player who is also blessed with some very special skills and attributes – incredible strength for a little man, a steam piston hand, good pace when he needs it, the tenacity to absorb the big hits and that spatial awareness and anticipation to know where he needs to be in five and ten seconds. I guess we call it instinct.

Clive, we are both former PE graduates and we can both agree that he is a bit of a gymnast. I half expect him to throw a few drops and knockdowns when he comes back halfway after scoring a try. He has this ability to bounce back and immediately find his balance whatever the situation.

Beneath it all is a player who has mastered the basics of rugby perfectly: passing, kicking, running and tackling. I’ve been able to play against all sorts of brilliant scrum-halves and have watched all the best since retiring, but there aren’t many, if any, who don’t have any weaknesses. And you Clive, with your coach cap, have you noticed an Achilles heel?

CW: No, not yet! I would also add that he has always looked mature beyond his years and I would commend France in that regard for launching him and Romain Ntamack into the 2019 World Cup. ended well with France implosing and losing a quarter-final to Wales which they should have won, but it was a hard lesson he would have learned.

ge: Totally. Come to think of it, I only tasted victory twice in my first nine Tests for Wales and the Lions. None of us in this Wales side that became Grand Slam winners were the finished articles when we started our Test careers. We all had to absorb defeats and disappointments and there was more where that came from when we were beaten in a two-Test series in New Zealand in 1969. We didn’t really start to flourish until after that. It’s a similar story with most teams that end up being successful.

CW: I’m a big believer in learning those lessons early. It’s easier to take them on board before you become too entrenched in your habits, before…

GE: Sorry to interrupt Clive, but is it me or is Dupont incredibly calm and undemonstrative? I wouldn’t want to play cards against him, that’s for sure! He has that game face and the mask doesn’t slip off for the full 80 minutes. There’s always a big smile when he scores but that’s it, he stays on the case, doesn’t get involved in gossip or gossip and doesn’t get into histrionics. He is ruthless like the great Kiwis.

CW: Absolutely, he doesn’t get distracted from the business at hand – which is winning rugby games and titles. He did it with Toulouse who won the French league title and the European Cup double last season and now he wants success for France.

ge: He seems like a great guy off the pitch too. There’s a whiff of old school about him. I had the chance to meet him a few times, most recently when Midi Oympique invited me to their end-of-year awards. He was unassuming and relaxed and clearly the soul life of the gathering and I suspect he’s a big character within the French group as well. When Toulouse or France win, he always posts a photo of them enjoying a beer and a song. He strikes me as a guy smelling roses on the way. He seems to be enjoying life.

He leads by example on the field and sets the tone for excellence. He was a pro role model from his early days at Castres until his inevitable move to Toulouse.

CW: Let’s open up the conversation a little bit with Gareth and the $64,000 question of why in French rugby it’s always the nine who runs the show whether he’s captain or not. For most teams it’s the combination of fly-half and midfield, with the 12 in particular seeming to get all the media attention and debate, but the nine has always been king in France. Every big team in France has a big nine.

ge: Good question, in my time I never faced a bad French scrum-half. For what it’s worth, I’ve always felt the first duty of the nine in France was to work with and muster their forwards – whether or not they have brilliant attacking skills themselves. They go to their pack first, which inevitably means the nine makes all the big calls. They run the show.

CW: I’m sure there’s a lot to that and the fact that you have a very good former French scrum-half – Fabian Galthie – coaching the team these days and another natural scrum-half to Shaun Edwards – capped by English schools at 9 – as second in command sees all three sing from the same hymn sheet. I wonder what the collective name is for a gathering of scrum halves…

ge: I have no idea but it would be a very noisy gathering!

CW: What about the nine from France you played against Gareth? You must have encountered an interesting array of characters and players.

ge: Have I ever Clive. The first one I met was Lillian Camberabero when I made my debut in 1967. Lilian was one of those French scrum-halfs who had all the tricks. The razzle dazzles behind your back, Harlem Globetrotters stuff. He could have played ten for France except that his brother Guy was already there! France were really building something good and we lost to them in 1967 and 1968 when Lilian was running the show. But after their 1968 Slam he seemed to go out of favor and a guy called Gerard Sutra walked in.

ge: Very. He did well against us when we drew in Paris, but he was knocked out after just four tests. Playing nine comes with its own pressures in France – you can be knocked out in the blink of an eye if the coaches pick on you. Marcel Pujet was the next one I faced. Now he was a real unit, a kind of French Mike Phillips and I thought we had some difficult years ahead of him around 1970 when he was practically the French player of the year and he was tipped for the top, but something happened and, like Sutra, it just seemed to disappear.

Then came Max Barrau who was very neat and tidy, probably the most complete defender behind the scrum for France. He could have played in any position. We beat them 9-5 in 1971 to win our first slam – you might think it was a heavy old game, but a friend sent me the footage recently and it was a brilliant game with as much running as the classic 1973 Barbarians and it was only wild tackles that reduced the score. Max had a great game that day.

CW: When did Jacques Fouroux enter the equation?

ge: He was the next but one. The first was Michel Pebeyre, a very good player. They beat us at the Park the year I played him but he didn’t last long. Then came my old friend Jacques who was a great player and a fantastic guy – “La petite générale”. He was barely half the size of some of the big beasts up front, but he treated them like a bad-tempered farmer leading his reluctant cattle into the milking barn! He had complete control of this mighty French pack and he was captain with an iron bar.

Off the pitch he was a larger than life figure, still in the Napoleonic mold and a delight. His reputation preceded him – but what a rugby brain. He captained France for a slam and also coached them for one. There aren’t many of these guys out there.

CW: Time has flown Gareth, we’ll have to wrap up here, but you’ve left us some big names to ponder. The old black and white images all come back to me with Bill McLaren’s commentary in the background. Dupont seems like an amalgamation of almost all of those players you mention and he has that X-factor that only the greats have. He’s a phenomenon and he’s still only 25 years old!

ge: He is a player that we can all appreciate, he is excellent for the game.

Wharton Lauder adds round 3: what you need to know