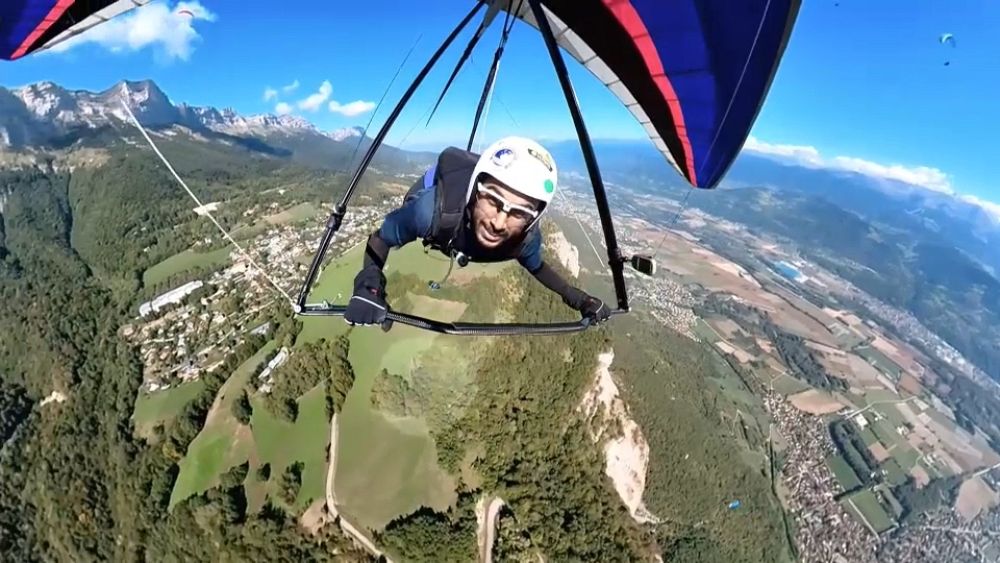 Hang gliders, paragliders and wingsuits were on display for six days at the La Coupe Icare free flight festival in the small town of Saint-Hilaire du Touvet, nestled in the Chartreuse mountains in the French Pre-Alps.

Other forms of powered flight have also been shown, such as aerobatic propeller planes and paramotors, or powered paragliders.

The main attraction on display is the carnival, where pilots try to outdo each other by donning the most colorful, creative, and ultimately wackiest costumes possible. At the end of the competition, a jury decides who should win a series of prizes.

One of the most eye-catching events was a large scale model of “Top Gun’s” F14 Tomcat fighter jet, from one of the competition’s favorites and previous winners – the duo of Rémi Bahuchet and Nicholas Pelard.

“Goose is here and he will drive, while I, Mavric, will relax and watch the countryside for a bit,” Pelard tells us, referring to the characters in the film.

“The goal is not to win, we just try to make a beautiful structure, to make the children laugh and to make the elderly dream.”

Although the weather was not great at times, with spells of rain and low cloud closing off the take-off area for periods, the organizers managed to get all the competitors off the ground on the first day.

Throughout the festival, many stalls set up selling a range of local products including food and souvenirs. Dozens of hang-gliding companies were also present, holding a large trade show, eager to showcase their wares to pilots.

Run by an army of volunteers, a concert was held almost every night, continuing until the wee hours of Friday and Saturday.

According to Thibaut Lajugie, co-president of the Coupe Icare, this is a major economic boost for the region, which has suffered for two years from restrictions linked to the coronavirus.

“Yes, it’s a big added value for tourism, the impact on all the traders who are there, the paragliding schools, the catering… it has a significant impact all year round.”

For its 49th edition, the Coupe Icare did not fail to disappoint, pilots and spectators from all over the world seeing the last summer sun dressed in style.