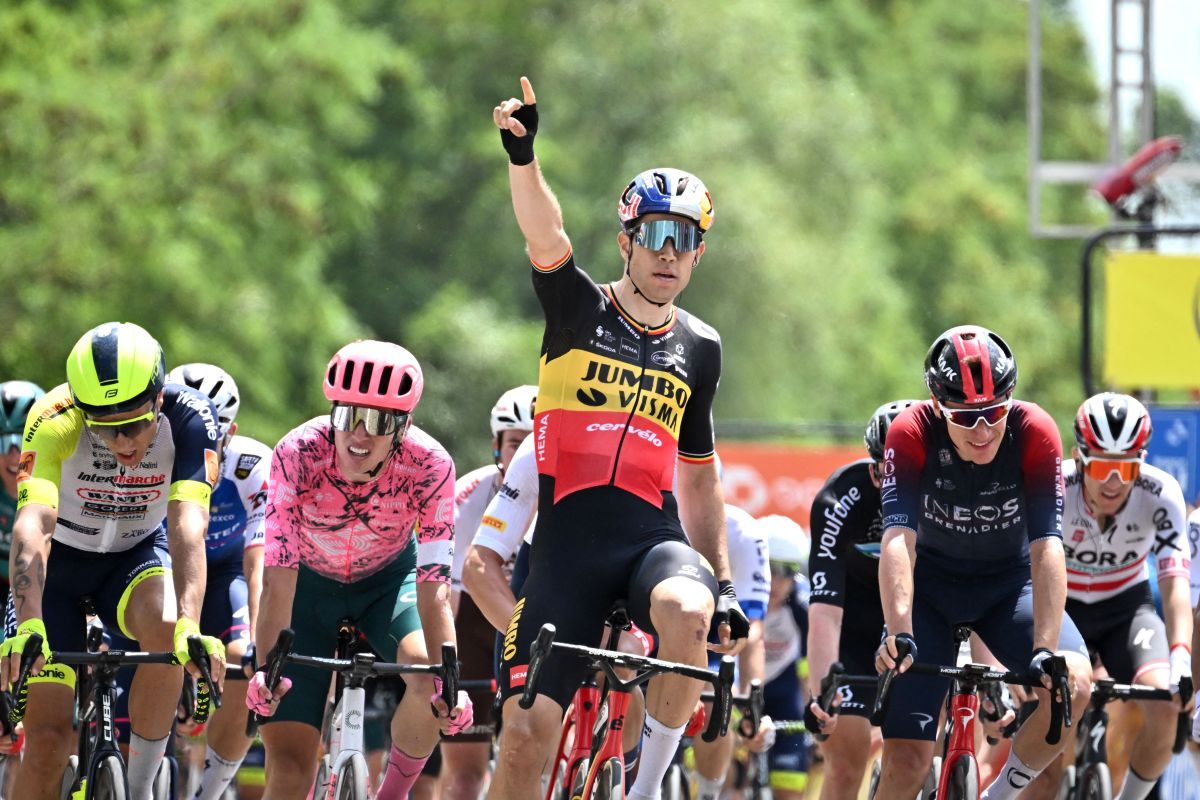 Wout van Aert (Jumbo-Visma) held on to win the first stage of the Critérium du Dauphiné after a massive sprint.

The Belgian beat Ethan Hayter (Ineos Grenadiers) in the last 200 meters after sitting on the British driver’s wheel during the run-in of the line.

Van Aert’s victory means he secures the overall leader’s yellow jersey at the start of the eight-day race where team-mate Primož Roglič will aim for overall victory.

The sprint victory is the Belgian national champion’s fourth victory in 2022, after a spring classics season hit by covid-19 and a lack of fitness.

HOW DID IT HAPPEN

It was a hilly course for the opening stage of the 74th Criterium du Dauphiné – with many riders looking to test their legs ahead of next month’s Tour de France.

The first stage offered a 191.8km test route from La Voulte-sur-Rhône to Beauchastel, the second longest of this year’s eight-day race.

Although described as a category three climb averaging 5.2% over 4.7km, the climb was deceiving as the peloton also had to tackle the unclassified Col du Moulin à Vent shortly. afterwards before finally descending towards the finish line.

The steep tests to start the stage played into the hands of climbers looking to enter the break, so it was no surprise that Pierre Rolland (B&B Hotels-KTM) escaped on the road.

After a 20 km stage, the experienced French climber is joined by Maxime Bouet (Arkéa Samsic) and Laurens Huys (Intermarché-Wanty-Gobert Matériaux).

The trio of escapees had widened a gap of three minutes when crossing the Col de Leyrisse and the Côte des Baraques, Rolland winning the maximum number of mountain points.

Barely 40km into the race and there had already been two retirements, Imanol Erviti (Movistar), who crashed in the neutral zone, and Niklas Märkl (Team DSM) both got off their bikes.

Meanwhile, leading the race, the breakaway had maintained a consistent two-minute gap with the peloton as they reached the foot of the Côte du Chambon de Bravas for the first time.

Rolland was the first to win the blue polka dot jersey at the end of the day, as the BikeExchange-Jayco team paced for their sprinter Dylan Groenewegen back in the peloton.

There was a moment of concern for Rolland when he punctured shortly after the intermediate sprint was reached at Beauchastel with 57km to go.

Fortunately for the 35-year-old, he was able to catch up with the leading duo a few kilometers further.

Trek-Segafredo came out on top of the peloton at the foot of the Côte du Chambon de Bravas for the last time.

Jasper Stuyven set a high pace on the climb as his team looked to drop many of the favorites for the stage.

Groenewegen was joined by Phil Bauhaus (Bahrain-Victorious) and Juan Sebastián Molano (UAE Team Emirates) as sprinters to be removed from the peloton.

With 32km to go, Rolland and Huys, the last breakaways, were quickly caught up as the peloton finished climbing for the day.

On the way back from the race, several counter-attacks were launched and Mikkel Honoré (Quick-Step Alpha Vinyl) managed to break free downhill.

However, Ineos Grenadiers won on the descent and canceled the Dane’s attack 22 km from the end.

The gap to the chasing sprinting group was over a minute at this point and Ineos, rolling for their fast man Hayter, set a relentless pace.

Groenewegen’s teammates dug in to try to get him back in contact with the peloton, but they were still half a minute behind with 10km to go.

With 4km to go the hopes of the chasing group were dashed and Remi Cavagna (Quick-Step Alpha Vinyl) looked to catch the peloton with a late flyer only to be quickly chased.

Inside the Red Flame and Ineos Grenadiers started leading Hayter with Filippo Ganna, however, van Aert was glued to the wheel of the British driver.

Hayter started his sprint with 200m to go, but he couldn’t shake the Belgian national champion off his wheel.

Van Aert moved alongside Hayter 100m from the line and once up to speed the Jumbo-Visma rider looked in complete control as he pulled away and raised his arms happily.

It was a perfect start for Jumbo-Visma, who come to this year’s race with a stacked squad hoping for overall glory as they prepare for Le Tour next month.

GENERAL CLASSIFICATION AFTER THE FIRST STAGE